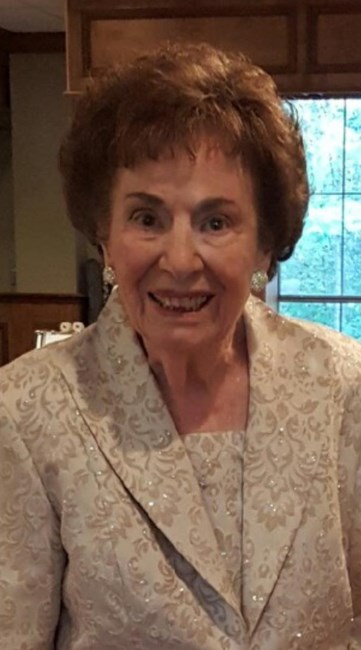 Prebble Clark Campbell of Jackson, MS went to be with the Lord Jesus Christ on November 3rd, 2020 at the age of 93 years. A celebration service honoring her life will be held at Lakewood Funeral Home on Clinton, Blvd. Jackson, Mississippi on Saturday, November 7th, 2020 at 12:00 pm with a visitation two hours prior. Burial to follow at Lakewood South Memorial Park. Prebble was preceded in death by her loving husband of 55 years Linnard S. Campbell, Jr., son Larry Scott Campbell (Debbie), daughter Sandy Lynn Poole (John), mother, father and seven siblings She is survived by her youngest son Lee Scott Campbell (Suzy). She is also survived by the special loves of her life, her five grandsons, Ray Scott Campbell (Tracey), Michael Curtis Campbell (Valerie), Brian Clark Jasper (Allie), Max Clark Campbell, Asher Henry Campbell and four great grandchildren, Ben Campbell, Bekah Campbell, Aaron Campbell and Hayes Jasper. Born and raised in the little north Mississippi town of Ingomar to Max and Kate Lee Clark she grew up on the family-owned farm working alongside her siblings and the sharecropper families growing cotton, tending timber, and performing everyday farm life chores during the Great Depression era.. She adored her seven siblings; Herman Clark, Ralph Clark, Edward Clark, Clatus Gardner, Doris Reed, Marlis Stewart and Betty Thomas. After graduating Ingomar High School she moved to Jackson to attend Draughon’s Business College where she met friend Royce Campbell’s brother Linnard who was home from serving in World War II, Germany “Battle of the Bulge”. Linnard and Prebble married on June 23, 1948. They had two children Larry and Sandy and then much to their surprise twenty years later another son…Lee was born. Prebble was a strong woman, dedicated wife, mother and homemaker, a founding member of Midway Baptist Church in Jackson, a youth Sunday School teacher and very dedicated to this local church and its ministries. Prebble was humble, loved to laugh and enjoyed caring for her family and church family very much. The family requests that gifts and donations may be sent in honor of Prebble to: Life Choices Pregnancy Center 112 7th St. N Columbus, MS 39701 where her grandson Ray Scott Campbell is Executive Director.
See more See Less

In Memory Of Prebble Clark Campbell