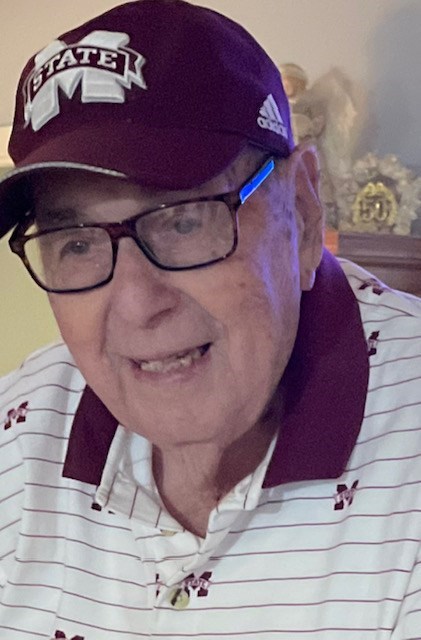 William "Bill" R. Grissett, Sr., 93, went home to Heaven on Saturday, July 30, 2022. Visitation will be held on Tuesday, August 2 from 5:00 to 8:00 PM at St. Francis of Assisi Catholic Church. His funeral mass will be held at St. Francis at 1:00 PM on Wednesday with visitation one hour prior. Interment will be at Lakewood Memorial Park. Pallbearers will be Eddie Franklin, Patrick Grissett, Jordan Burt, Brian McFarland, Michael Grissett and Trey Burt. Mr. Bill Sr. was born on February 16, 1929, to Bruce and Edwina Grissett. A graduate of Saint Joe High School, Class of 1947. He recently was honored for being the "Oldest Living Graduate from Saint Joe High School", he was so proud to receive this honor. His law enforcement career began with the Jackson Police Department where he served the Citizens of Jackson for 23 years, ending his career there as a Captain. Continuing his career in Law Enforcement, he served as Director of the Law Enforcement Assistance Administration (LEA). He then returned to serving the Citizens of Mississippi by holding the position of Chief of Police for the Canton Police Department for four years. He continued his Law Enforcement career for the State of Mississippi with the Capital Police Department where he was a Lieutenant. Finalizing his Law Enforcement career with Day Detectives of Jackson, Mississippi, he decided it was time to retire and enjoy life with his wife, children, grandchildren, and great-grandchildren. To know Daddy Bill, you would know that he enjoyed being at the golf course on Saturday & Sundays, really whenever he could go, with his sons alongside. He attended church for Saturday/Sunday Mass with Momma Sue by his side. The enjoyments of his life were having all the family gatherings at their house. Whether it was celebrating a birthday, a graduation, cooking out and playing games, watching football games, or just enjoying his family being there. Everyone was always welcome. He made sure you knew you were welcome from the moment you walked in, and he spoke to you until you hugged and told him bye. He would then say, "You come back now". That was our Daddy Bill. Regardless of if you were family or not, there was always an "unspoken, no invite needed" policy and all were always welcomed by Daddy Bill and Momma Sue. You could see it brought him joy to see joy in others. That was just the kind of man he was. When you think of Daddy Bill, MSU comes to mind, right? Number #1 fan, YES! He enjoyed watching the MSU Football games and cheering for the Bulldogs through and through, that was our Daddy Bill. The times he spent during the days telling his stories to family or friends while sitting in his chair rocking outside, alongside his "Bride-Beautiful Bride", as he would call Momma Sue at times, are so loving and memorable for us all. As we all have many memories of our "Daddy Bill", that will always be cherished and never forgotten. He is preceded in death by his parents, Bruce and Edwina Grissett, his brothers, Bobby Grissett and Bruce Grissett. He is survived by "His Beautiful Bride-Momma Sue", Mrs. Sue Tramel Grissett. They have been in love and happily married for 69 years; brother, Robert Grissett (Marlene); sisters, Ruby Lee, Minnie Westbrook and Loriane Bynum; children, Teresa Grissett, Bill Grissett, Jr. (Debbie), Debbie Dotson (Don), Alan Grissett (Laura) and Mike Grissett. Daddy Bill and Momma Sue have eleven grandchildren and nineteen great-grandchildren. "For the LORD is good. HIs unfailing love continues forever, and his faithfulness continues to each generation." Psalm 100:5 In lieu of flowers, donations can be made to St. Francis of Assisi Catholic Church or to a church of your choosing.
See more See Less