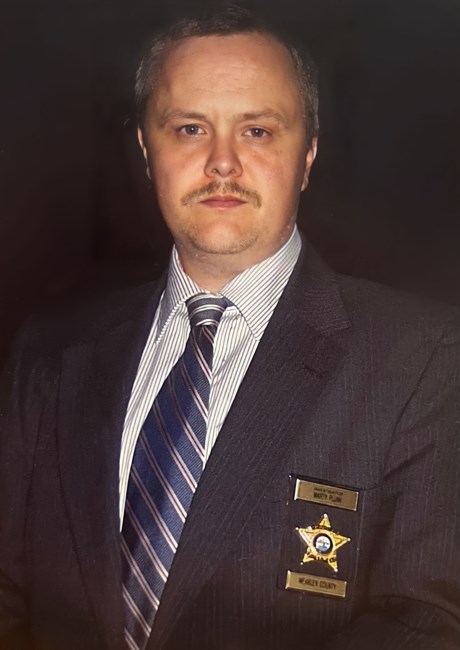 Marty James Plunk, age 52 of Sharon, TN, passed away on November 12, 2022 in Germantown. Marty was born on June 1st, 1970 in Union City, TN to Trella Jean Prince Plunk and the late James Henry Plunk. Marty was born with a congenital heart defect that required numerous open-heart surgeries throughout his life. Through all of his health problems, he persevered and continued to serve his community in many ways. Marty's heart was a servant heart. After short stents at Sharon Police Deparment, Dresden Police Department, and Kenton Police Department, he joined the Weakley County Sheriff’s Department on November 11th, 1999 where he quickly rose through the ranks and last obtained the rank of Captain of the Investigations Division. Law Enforcement truly was his passion Marty was an avid outdoorsmen and loved to hunt and fish. He always said that being in the woods was the closest to God he had ever gotten. He loved all the hunting seasons but especially squirrel and dove hunting in the fall, whitetail deer hunting in the winter, and fishing in the summer. He especially loved it when his son and daughter were able to go with him. Marty was a giant of the faith. He studied his bible diligently, taught his Sunday school class, filled in as a minister in various churches, and was an active member of First Baptist Church in Dresden where he served as a deacon and on several committees. He was united in marriage on April 28th, 1990 to Angela Dawn Jones and to this union were born two children, David James "D.J." Plunk and Courtney Denise Plunk. These three people were the loves of his life, and they loved him back in equal measure. He is survived by his loving wife of 32 years, Angie Jones Plunk of Sharon; his son, David James "D.J." Plunk of Jackson, and his daughter, Courtney Plunk Roberts (Zack) of Martin; and the absolute apple of his eye, his only grandchild, Mollie James Roberts. He is also survived by his mother, Trella Plunk of Sharon; his siblings, Christie Plunk Bostwick (Stacey) and Rusty Plunk of Sharon; he is also survived by his mother-in-law, Judi Jones of Sharon; his brothers-in-law, Chris Jones (Stephany) of Hernando, MS and Joshua Jones of Winter Park, FL; and his sister in law, Rachel Jones Whites (Shawn) of Dresden; he is also survived by several nieces and nephews. The family will receive friends on Friday evening, November 18th, 2022 from 4-8 p.m. at Dresden First Baptist Church, 490 Morrow St., Dresden. Visitation will resume on Saturday, November 19th, 2022 from 11 a.m. - 1 p.m. with funeral services to follow. Burial with Police Honors will follow in Sunset Cemetery. Marty will be escorted into Dresden by members of law enforcement from George A. Smith and Sons Funeral Home in Jackson on Friday afternoon with the procession leaving Jackson at 2 p.m. Pallbearers to serve will be Retired Sheriff Mike Wilson, Retired Chief Deputy Mark Black, Sheriff Terry McDade, Lieutenant Neal Cantrell, Investigator Eric Smith, Investigator Mason Wortham, Deputy Steve Fulcher; and Deputy Gavin Elam. Flowers are welcome, but for those desiring, memorials in Marty’s memory may be directed to Sunset Cemetery, c/o Kelley Swearingen, 1268 Boydsville Rd., Dresden, TN 38225. Fond memories and expressions of sympathy may be shared at www.GeorgeASmithandSons.com for the Plunk family.
See more See Less

The Interment with Police Honors