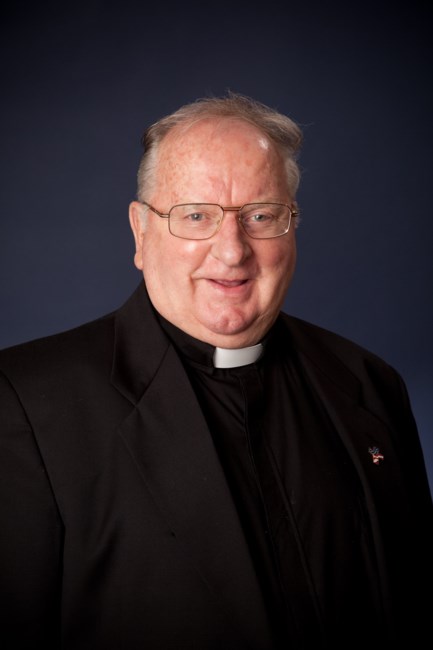 Father Daniel Cody – Retired Priest and Pastor of St Joseph’s Catholic Church, Jacksonville, Florida Father Daniel Cody followed his faith into the Kingdom of the Lord on Wednesday, Sept. 1, 2021. The son of Daniel and Bridget Cody, Daniel was born on Sept. 17, 1937, in Carrigcloney, Glenmore, County Kilkenny, Ireland. He was one of nine children, with Richard (Dick) the eldest brother, followed by Peggy (deceased), Martin, Anna (deceased), Walter, Michéal, Breda and the youngest, Father Tom Cody, who followed his older brother into the priesthood in Florida. He was also a proud uncle to seven nieces and twelve nephews. Father Dan completed his Leaving Certificate in September 1956 and entered the Seminary of St Kieran’s College, Kilkenny. He was ordained in June 1962, and he decided to travel overseas to Florida. Among his first assignments were Resurrection Catholic Church, St. Ambrose Catholic Church, Blessed Trinity Catholic Church, as well as Bishop Kenny High School where he taught scripture. In 1968, he was assigned to Most Holy Redeemer Parish in Jacksonville, where he served for 14 years before Bishop John Snyder appointed him pastor of St. Joseph Parish in Mandarin in 1982. He served the growing parish community for 31 years until his retirement in August 2013. Father Dan was a leader in the Mandarin community. He was tender-hearted, warm, and loving but firm. He kept an open-door policy, and his parishioners felt comfortable stopping by for impromptu meetings. He was never afraid to express his opinion. He was open to innovative ideas, concepts, and proposals. Ultimately parishioners knew that “Father knew best,” and he knew exactly what the parish needed. Father Dan’s faith in the Holy Spirit resulted in a steady growth in the number of families as they spread the love of Christ. His vision for the community was to allow parishioners to become ministers of the Body of Christ, keeping the church welcoming and family-friendly. Father Dan also touched many parishioners through the sacrament of baptism, First Communion, confirmation, reconciliation, marriages and the sacrament of anointing. Father Dan was especially proud of the men that became permanent deacons and priests due to his mentoring. Father Dan’s plans for the parish were also especially important. During his tenure, many construction projects help expand St. Joseph’s: • 1983 new food bank and expansions • 1985 new rectory • 1988 new school, gym and expansions • 1989 new parish center • 1999 new main church • 2004 new Cody Enrichment Center • 2007 new Divine Mercy House Throughout his life, he had a huge interest in sports. As a younger man, he was often seen in Croke Park with his siblings, nieces and nephews supporting Kilkenny in the Leinster Finals and All Irelands. All visitors to his home, named ‘Glenmore’ after his home village, would remark on the two large side-by-side televisions where he viewed all types of sports, following USA and Ireland. He remained an avid fan of the Manchester United Soccer team until he was convinced to follow Liverpool later. Father Dan adored the Kilkenny hurling team and anything that related to the ‘black and amber.’ Always asking, “Will Kilkenny have a team to win the All Ireland this year?” He also enjoyed hearing the club news from Ireland and hoping Glenmore would rise to the top again. Another great love of his was golf. He played many courses and had many willing nieces and nephews offering to caddy during his summer travel to Ireland. After continuing issues with his lower back, he switched to watching his beloved golf on TV. Father Dan loved big family reunions and was a very social person. He enjoyed catching up with all his nieces and nephews as they grew older and their lives developed. He would often make trips home to Ireland to officiate at his sibling’s weddings. Both Father Dan and Father Tom continued the tradition of officiating at family weddings by marrying their many nieces and nephews, both in Ireland and even one in St. Joseph’s. A family tradition every Sunday night was the phone call home to Ireland. His mother waited for the call to hear about how everything was in Florida. Thankfully, his mother, Bridget, made several trips to Florida to experience what life was like for her two sons that had moved overseas from Ireland. Many of his brothers, sisters, nieces, and nephews also made many trips to Florida to witness the mammoth building tasks, fundraising and parish activities that were always happening. Many returning family members would always comment that he was at his desk at 6 a.m. and did not rest until he did his final drive around St Joseph’s to check that all the buildings were secure. Then he would relax with his late-night cigar. After his retirement, he could be found sitting outside the garage at Glenmore enjoying his traditional cigar! Father Dan was a vibrant and colorful character with a big personality, which is why it is hard to believe that he is gone. He will reunite with his parents, sisters, nephew, and other family/friends in Heaven. Perhaps eyeing some construction or building work that needs to be done! All services and burial will occur at St. Joseph Catholic Church, 11730 Old St. Augustine Road, Jacksonville, FL 32258. The services are: Mass of Transferal: Friday, Sept. 24 at 8 a.m. – Celebrant: Bishop Thanh Nguyen of the Diocese of Orange. Visitation hours: Friday, Sept. 24, 9 a.m. – noon and 5.30 p.m. through Saturday, Sept. 25, 7 a.m. Vigil Service: Friday, Sept. 24, 6:30 p.m. – Celebrant: Father Sebastian George, CMI A Mass of Christian Burial will be celebrated: Saturday, Sept. 25, 9 a.m. - Celebrant: Bishop Felipe J. Estévez (livestreamed) Interment to follow in St. Joseph’s Cemetery In lieu of flowers, donations may be made to St. Joseph Catholic Church Capital Campaign. Arrangements are under the care and direction of HARDAGE-GIDDENS FUNERAL HOME OF MANDARIN, 11801 San Jose Blvd. Jacksonville, FL 32223. www.hgmandarin.com (904) 288-0025. Fond memories and expressions of sympathy may be shared at www.hgmandarin.com for the Cody family.
See more See Less

In Memory Of Fr. Daniel Cody

A Mass of Transferal

A Mass of Christian Burial will be celebrated