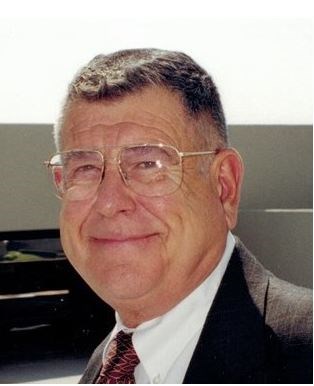 George Peter Drolsom died peacefully on April 6, 2019 in Jacksonville, FL. George was born on March 19, 1935 in Chicago, IL. He was the only child of Irene H. Bovermann and Dr. George A. Drolsom. He graduated from the University of Chicago Laboratory School and then from the University of Illinois at Urbana-Champaign. When his dad (Doc) decided he wanted to raise livestock, he bought a farm in Sandwich, IL where George spent most of his childhood and learned to repair all things mechanical. He continued to help raise, buy and sell cattle until Doc’s death, at which time George quickly got rid of all things on four legs, becoming a gentleman farmer who grew corn and soybeans. While attending the University of Illinois George worked part-time at a Porsche dealership, it was the beginning of an extensive career with Porsche and a life-long love of racing. George became the first non-German in the United States employed by the Porsche factory. He learned the German language quickly and became a valuable asset to the legendary car manufacturer. Starting in 1956, George was one of the first people to race the then-new Ford Thunderbird in Club racing, competing against the Corvettes in the B Production class. During his long tenure in USRRC and Can-Am events he won the GTU class in the 1965 Bridgehampton race. While racing his Porsche 911 in the IMSA’s Camel GT series George notched ninety-three race starts, he competed thirteen times in the 1966-83 Rolex 24 at Daytona, and drove in multiple Twelve Hours of Sebring events. In 1967 he had class wins in both the Sebring and Nassau events. George won the Porsche Cup for under 2.5 liter cars in 1975 and was one of the founders of the Concourse d’ Elegance at Amelia Island. George was much more than a race car driver and farmer. He spent two years in the Army Reserves; he was a Master Mason, a Shriner, and a member of several organizations including: the Road Racing Drivers club, the Sports Car Club of America, Saturday Car Talk, and Wednesday Lunch Group (you know who you are.) He was intelligent, could fix just about anything, most loyal friend you could have, he loved a great joke, was an amazing cook, and the only man I ever knew who sent out Christmas cards (I still have the lists dating back to 1965.) I would like to thank all of our friends, as well as the staff and caregivers of Visiting Angels, Baptist Hospital, Bartram Crossing and Community Hospice. The care you provide and the kindness you offered was tremendous. George is survived by his wife of 30 years (although George always said 25) Linda, and cousin, Carl Bovermann. In lieu of flowers you may make a donation to a charity of your choice or to Shriners Hospital for Children in Tampa, FL. A Celebration of Life will be held at 1:00 pm on Saturday, May 04, 2019 in Hardage-Giddens Funeral Home of Mandarin, 11801 San Jose Boulevard, Jacksonville, FL 32223 with a Reception to follow. The family requests for friends to please bring your photos and memories to share. A Reception will take place on July 27, 2019 at 2:00 pm at 3980 E Sandwich Rd, Sandwich, IL 60548. Arrangements are under the care and direction of HARDAGE-GIDDENS FUNERAL HOME OF MANDARIN, 11801 San Jose Blvd. Jacksonville, FL 32223. www.hgmandarin.com (904) 288-0025.
See more See Less

In Memory Of George Peter Drolsom