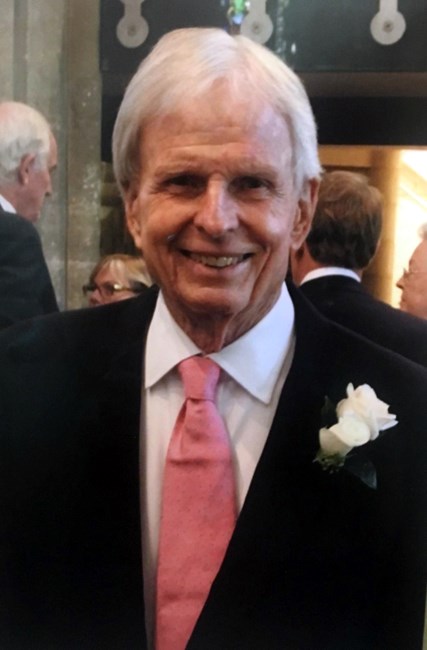 James Horner Winston The family, friends, and the citizens of the First Coast lost a genuine treasure with the passing of Jim Winston on Wednesday September 19, 2018. Jim was born in Raleigh, North Carolina on October 31, 1933 to the late Robert Watson Winston Jr. & Anne McKimmon Winston. He was valedictorian of his 1951 graduating class at Virginia Episcopal High School and earned a Bachelor of Science degree a mere three years later from the University of North Carolina at Chapel Hill. Shortly thereafter Jim entered Naval Officers Candidate School, retiring from the Navy in early 1958. It was during his first year of Naval service that Jim married Mary Burgman Winston, his wife of 54 years who passed away January 13, 2009. Together they raised two children, Mary "Kimmie" McKimmon Winston and Dr. James "Jimbo" H. Winston Jr. Jim also has two siblings, Charles McKimmon Winston and Jane Winston Witherspoon. In addition, he was a loving grandfather to Hana and Leo Mason, Aiden and Hunter Winston and was the favorite uncle and great uncle to numerous nieces and nephews. Jim is survived by longtime family friend and adoring wife, Jeanne Bass Winston, with whom he found love, laughter, and companionship in his later years; Jeanne's children Brett Bass (Caroline), Dr. Brian Bass (Susie), and Dr. Brenda Bass (Ken) were blessed to have been witness to the love story their mother and Jim shared. The Navy introduced Jim to Jacksonville and he moved his young family here shortly after his discharge. It led to what proved to be the start of a truly remarkable sixty-year business career and extraordinary service as civic leader, community servant, and philanthropist. One could easily marvel at what he accomplished in the realm of investments and real estate development during his time with the legendary Charter Company and then as co-founder of the Barnett Winston Company. A particular source of pride for Jim was their ability to bring the iconic Ritz-Carlton to Amelia Island. Still Jim would prefer that we remember him for all the good he did for this community and the many, many ways in which he earned as he liked to call it his "psychic income." He served in a leadership capacity on far too many boards to enumerate. He had a particular passion and played a critical role in the success of such intuitions as the Episcopal School of Jacksonville, where he was awarded its highest honor being named Trustee Emeritus and in 2017 they dedicated its Head of School office in his honor. In 1983, when Jim served as the President of the Jacksonville Chamber of Commerce, he championed what proved to be a longstanding moniker for the area...Florida's First Coast. For more than twenty years he served on the board of Metropolitan YMCA during which he served as Chair in 1985 and later Chairman of its capital fund drive. In 2016, the newly constructed YMCA which replaced the longtime Yates YMCA facility on Riverside Avenue, was named the Winston Family YMCA in recognition of Jim and his family's faithful contribution to its success over the decades. Jim also had a special place in his heart for the arts and classical music in particular - the Jacksonville Symphony, the Jacksonville Symphony Youth Orchestra, Douglas Anderson School of the Arts, and the First Coast Community Music School were all beneficiaries of his leadership and largess. Jim also served as mentor and trusted advisor to countless men and women who held positions of leadership in this community. From Mayors and other elected officials to CEO's in either the for-profit or non-profit sectors, Jim could be counted on as a trusted confident who challenged their thinking and sometimes their courage when risk-taking was required but who, through it all, stood behind those who called upon him for counsel. Jim's journey through life also included mentors, business associates, and countless friends from whom he garnered great pleasure and inspiration. While the list is endless he often spoke of Walter McRae, Prime Osborn, John Buchanan, Doug McGeorge, Bobby Stein, Gilchrist Berg, and of course the members of the "Monday Group," both past and present. A special debt of gratitude is extended to Jim's faithful employees: Marvin Milliner, his primary caretaker who became his right-hand friend, Annie Seseberry who gave 20 years of devotion to the home, Marie Beck that graced Balsam, North Carolina with her handywork, and Mary Ross for twenty years of dedication to "Mr. Winston's Office". A truly loving husband and father, a great champion, and friend to so many others, all are saddened by his passing but ever grateful to have had him in their lives. A Visitation will be held on Monday, September 24, 2018 from 5:30 p.m. until 7:30 p.m. at Hardage- Giddens Funeral Home, 729 South Edgewood Avenue. A Memorial Service will be held on Tuesday, September 25, 2018 at 2:00 p.m. at St. Mark's Episcopal Church, 4129 Oxford Avenue. In lieu of flowers, donations to the Alzheimer's Association, a renowned organization that funds research into dementia and related diseases, can be made "In Memory of James H. Winston" at alz.org or National Processing Center, Alzheimer's Association, PO BOX 96011, Washington, DC 20090. HARDAGE-GIDDENS EDGEWOOD CHAPEL, 729 South Edgewood Avenue, Jacksonville, Florida 32205, is serving the family.
See more See Less

In Memory Of James Horner Winston