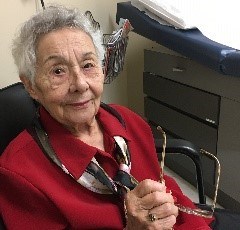 Laura M. Farwell of Jacksonville, Florida, and formerly of Fredericksburg, Virginia passed away 20 September 2022 at the age of 100 years old. Laura was born in Adjuntas, Puerto Rico on 28 March 1922 where she lived until she moved to San Juan to attend the University of Puerto Rico followed by graduate school at Case Western Reserve in Cleveland, Ohio where she earned her Master’s in Library Science. Returning to her beloved island, she worked as a librarian at the base library in Fort Buchanan, Puerto Rico where she met and married her husband, Faris, who was serving as a U.S. Army officer during the post-World-War II years. From that moment on, their world would never be the same. They moved to Fort Benning, Georgia where they started a family and Laura soon excelled at the demands of being both an Army Wife and a mother. Follow-on postings included tours in Troy, New York; Monterey, California; Augsburg, Germany; Fort Leavenworth, Kansas; Highland Park, Illinois; and Alexandria, Virginia. Being an avid traveler and always a librarian, Laura loved to learn the culture of each country or location in which she visited. In-spite of the tensions surrounding life in the early 1960’s Cold War Europe, Laura thrived in traveling with her children to see the sites of Paris; Rome; Amsterdam as well as recent battlefields and memorials to ensure we would never forget. She fervently believed in the goodness of people, particularly young children, and took great pride in welcoming into her home young orphaned children to spend Christmas and Easter with our family. Each child was always welcomed with gifts, wonderful meals and love... and, ever the librarian, Laura made sure every child left with a packet of books to help them cope and face their future. Later Laura faced her own set of challenges as her husband deployed for war multiple times during his career. Ever the optimist, Laura excelled being both mother and father during his absence and in doing so, demonstrated daily to her children that with a positive attitude and a little extra effort, you will always succeed. Moving to Fredericksburg, Virginia following Faris’ retirement, Laura once again pursued her librarian’s passion and became a researcher for the Fredericksburg Historic Foundation to help preserve and document our history. They continued to travel with amazing journeys to the Galapagos Islands, South America, Spain and the Greek Islands. She was exceptionally proud of her children and their families and will be especially missed by her 11 grandchildren: Kristy Noel (Miranda), Nikki Raynes (Matt), Tom Farwell, Andrew Farwell (Allison), Marisa Farwell (Will), Tulene Farwell, Connor Farwell, Addison Farwell, Shelli Ball, Jack Ball, Ryan Ball; and 3 great-grandchildren: Jackson and Riley Raynes and Alby Farwell -- all of whom she adored. Laura was predeceased by her husband Faris (1996) and 4 siblings. She is survived by her children; Laurie Noel (David), Faris (Judi), Randy (Susan) and Allison Ball (John); and brother Turi Fuste’ (Sarine). A service to celebrate her life will be held later at the Fort Myer Chapel in Arlington National Cemetery. In lieu of flowers, please consider donations to United Way for Puerto Rico, https://unitedwaypr.org/, the American Library Association for their annual Caldecott Medal award for children’s literature, https://www.ala.org/alsc/donate, and Reach Out and Read https://reachoutandread.org/, a charity to improve childhood literacy.
See more See Less

In Memory Of Laura Mercedes Farwell