In lieu of flowers, donations may be made to the Stuart Heritage Museum. 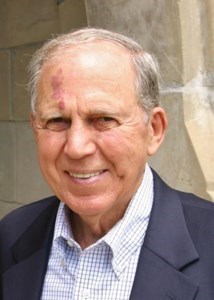 Thomas Henry Thurlow Jr., age 85, passed away on Saturday, April 2, 2022. "Tom" was born on December 31, 1936 and was grateful that in 1952 his parents, Jane Ames Buck and Thomas Henry Thurlow Sr., moved the family from Liverpool, New York, to Stuart, Florida. Forever after, Stuart Tom's beloved home town. At Stuart High School, Tom played basketball and football, becoming captain. He was always proud to have been coached by war hero, Fergie Ferguson. After graduating valedictorian in 1954, Tom attended the University of Florida and joined Pi Kappa Alpha fraternity. He earned a bachelor's degree in political science followed by a law degree in 1961. In 1962, he married Sandra Henderson of Gainesville, Florida. That same year, the young couple moved to Travis Air Force Base, California, where Tom served as a captain in the Judge Advocate General Corps of the U.S. Air Force. In 1964, Mary Jacqueline was born. In 1965, Tom and Sandy returned to Stuart where Tom Joined his father at Thurlow & Thurlow, P.A., now one of Stuart's oldest law firms. In 1968, Jennifer Lynne was born. In 1970, Thomas Henry Thurlow III (Todd) followed. He leads the family law firm today. Tom was a faithful and loving father, husband, and friend. During his life, he loved tennis, ocean fishing with friends, and foreign travel. Sandy and Tom enjoyed studying, collecting, and sharing Florida history. In 2011, Tom published "The Early Lawyers of Martin County, The First Forty Years, 1925 to 1965." Always involved in his community, Tom was active in St. Mary's Episcopal Church, served as president of the Martin County Bar Association, and on the Board of Directors for First National Bank and Trust Company of Stuart (Seacoast Bank). He also served on the Board of Trustees for Indian River Community College (Indian River State College) and was president of the Kiwanis Club of Stuart. An avid football fan, Tom was home watching a Florida vs. Georgia rerun when God took him home. He is survived by his wife of 59 years, Sandy; his three children, Jacqui Thurlow-Lippisch (Ed); Jennifer Flaugh (Mike); Todd Thurlow (Deanna); and six grandchildren, Evie Flaugh, Austin Flaugh, Charlie Flaugh, Natalie Thurlow, Mary Thurlow, and Julia Thurlow. Tom is also survived by his loving sister, Mary and her husband, Dale Hudson Sr. In lieu of flowers, donations may be made to the Stuart Heritage Museum. Memorial Service will be held on April 23, 2022, 11am at St. Mary’s Episcopal Church, 629 SE Ocean Boulevard, Stuart, Florida.
See more See Less

In Memory Of Thomas Thurlow