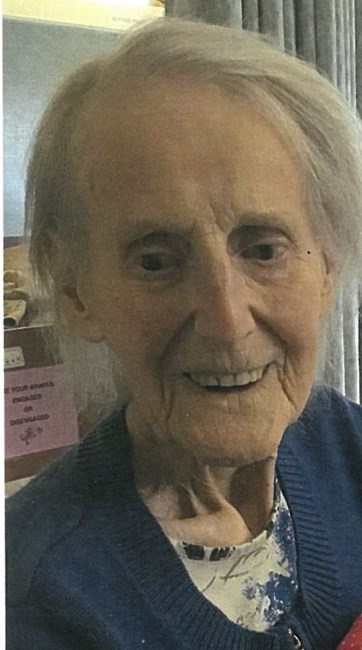 Mrs. Gerlinde B. Goerlitz (nee Arendt) slipped away very peacefully at Overlander Care Home in Kamloops, B.C. with her granddaughter Letitia Whitaker (nee Goerlitz) by her side around 10 p.m. on Tuesday, May 3, 2022 at the mighty age of 100, her niece Jane Feely (nee Schroeder) having just left for home. She will be sadly missed by son Gunnar Goerlitz and his daughter Heather, daughter Liana, husband Gregg, and their little ones, Noelle and Grayson, and son Holger Goerlitz and his sons, Matt Goerlitz, wife Dawn (nee Sehn), and their children, Dayton, Levi, Harley, and Aurora of Penticton, B.C., son Jordan Goerlitz and wife Nessa (nee Graham) of Penticton, B.C., and son Zac Goerlitz and partner Hollie Tayal, also of Penticton, and my dear daughter Letitia and her husband Matt Whitaker and their daughters Molly, Megan, and Ellie of Summerland, B.C., as well as many friends, relations, and loved ones around B.C. (especially Quesnel) as well as far too many to mention back in her old native homeland, Germany. She was born in Breslau, Silesia, in north eastern Germany (Prussia) on March 25, 1922 and is the very last of her five Arendt family siblings (sisters Traute von Scheffer, Reina von Rege, Gudrun Kliemann, and Arnhilde of Germany, and younger brother Glenn Arendt of Merritt, B.C.) to leave this earth for a better place with our Lord Jesus Christ in heaven. She was predeceased by her former husband (our Dad and Grampa, Heinz Goerlitz of Kelowna, B.C.) back in 2007. In the meantime, mom had become personally involved with Dr. Werner Nagel in Germany, taught school there in their public system, and became the nanny/mother of his daughters, Birgitt, Siegrid, and Vera ("Schatzy"), and their brother, Gerhardt (sadly also deceased), through most of their growing up years. They will dearly miss her too. Gardening was her main activity pretty much all of her life, providing (with some help of course) year­ round vegetables for our little family back on our farm near Marguerite, B.C. Her all-time favourite consideration was always for that which was the most practical. She loved music and to sing both in church and at home, and we're sure she'll get to do plenty of that in heaven. She was generous to a fault to one and all over all these years, never letting a favor go unrewarded if she could help it, and she was always a great one for herbal health. As a professional school teacher to the core, she was always ready to teach anyone who would listen all about such things whenever the opportunity availed itself, and many, myself included, benefitted in many ways from her knowledge. And she made the best meat-n-potatoes or dumplings n' gravy roasts out of pork, beef, or moose-meat that you've ever tasted­ with her German pork roasts, dumplings, gravy, sauerkraut n' blue cabbage eclipsing them all. Her memorial service will be conducted by Pastor Jim Caruso at Crossroads Community Church on Saturday, June 11th at 11 a.m. with a dinner to follow at 12. No final interment has been decided upon so we will say "Good-bye for now Mom (and Oma), and we'll see you later, with much love from Gunnar, Holger, and all."
See more See Less

In Memory Of Gerlinde Brigitte Goerlitz