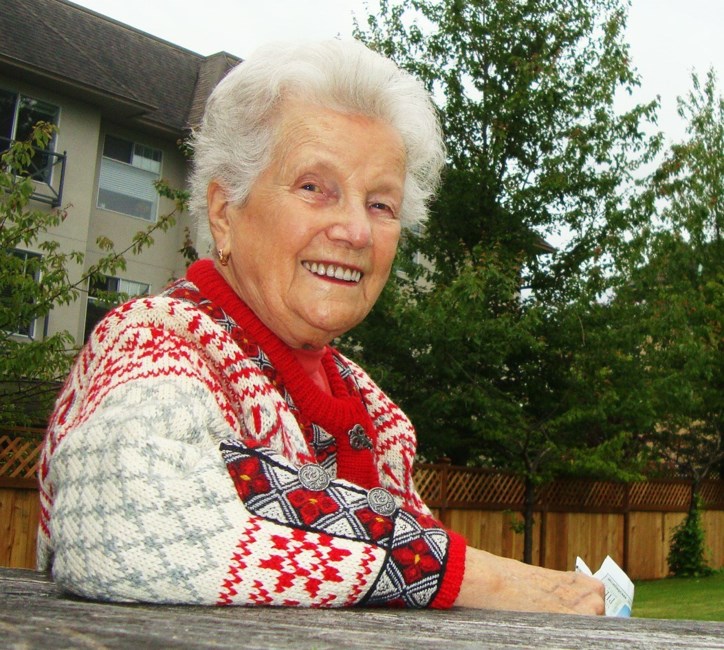 Marjorie Evelyn Sedgman January 28, 1919 - January 26, 2021 Marjorie Evelyn Sedgman (Griffiths) was born in Kelowna, BC during the Spanish Flu pandemic and died in Kamloops during the Covid-19 pandemic just two days short of her 102nd birthday. Marjorie was a precocious middle child with three sisters Megan, Esther, Olwen, and a brother, Jack. (All deceased.) As the daughter of a United Church minister, Marjorie and her siblings spent much of their childhood moving every two or three years, which resulted in many long-standing friendships in southern British Columbia. Marjorie, bursting with energy, loved all sports especially basketball, baseball and track. She performed tricks on her mother’s British bike, teasing and shocking the “old spinsters” across the street. Marjorie was ten years old when the stock market crashed in 1929. The following years of the Great Depression left an indelible mark on her. The church supported the endless stream of people disembarking the train in Vancouver, all looking for work. Marjorie’s father was often paid in the form of food or clothing. One of the girls opened the door one morning to discover a whole slaughtered chicken on the front step! The family moved to Victoria, and Marjorie soon met Keith, the love of her life and her husband of 72 years. He had heard about the Griffiths girls living in Sidney. He and his friends biked all the way from Victoria to check them out! Marjorie’s father arranged a summer job for her with the suffragette Nellie McClung. Marjorie said she was hoping for a “refined” job sorting Nellie’s papers. To her dismay, she was given a shovel and told to plant garlic. No teenager was going to touch Nellie’s papers! At graduation she became a secretary within the civil engineering department at the BC parliament buildings. She had many chance meetings with the artist Emily Carr pushing her baby buggy with her monkey and dog. Marjorie and Keith married in February 1941 at the beginning of World War II. But Marjorie lost her job at the parliament buildings. “They were giving jobs just to unmarried women.” Keith joined the war effort and was posted in Newfoundland as a naval signals officer. Marjorie joined him, travelling alone across Canada on the train. Then crossed the straits to Newfoundland on a blacked-out ferry to avoid U-boats. There she volunteered for the Red Cross baby clinics. Returning to Victoria after the war, Marjorie continued to volunteer for the Victoria Order of Nurses baby clinics. Her son David was born in 1948 and daughter Roma arrived in 1951. Although Marjorie was considered a “homemaker” on official forms, for her it entailed much more. She partnered with Keith in running their new venture – a cherry orchard in Central Saanich. She chased orphaned lambs around the kitchen. And she was good at jumping fences when chased by the ram. Cats, dogs, horses, rabbits and chickens became part of the family. Three gardens, fruit tree maintenance, cherry and apple picking, harvesting and canning kept Marjorie busy. But there was always time for family vacations that included camping and road trips throughout BC. Marjorie was very active with the Shady Creek United Church Women’s group. With members of the church, she and Keith sponsored a Vietnamese family, the Quachs, enjoying a lasting friendship with them. The sixties brought travel. Boat ownership meant many magical weekends on board, as well as longer trips cruising around the southern tip of Vancouver Island and up through the Georgia Strait and Inside Passage. Marjorie and Keith also visited many countries around the world sometimes on cruise ships but mostly driving through foreign countries in rental cars. However, when asked what her favourite place was to visit, Marjorie enthusiastically responded “Newfoundland!” As they aged, Marjorie and Keith gave up the farm and moved to Amica at Beechwood Village where they made many new friends. The best thing about Marjorie is that she loved people and was genuinely interested in their stories. She had a wicked sense of humor and loved her scotch. She will be greatly missed by her son, David (Elaine), and her daughter, Roma (Linda). She was Gran to Casey (Nathalie) and Robin (Iain) and GG to Pascal, Vincent, Zoe and Tyson, and Auntie to many nieces and nephews. Marjorie will also be missed by the Quach family: Young, Hong, Kiki and Vivian as well as many devoted friends. Our family thanks the nursing staff of Berwick on the Park and Kamloops Seniors Village for their kind and loving care of Marjorie while she lived in Kamloops. We will all celebrate Marjorie’s life when we are able to gather safely.
See more See Less

In Memory Of Marjorie Evelyn Sedgman