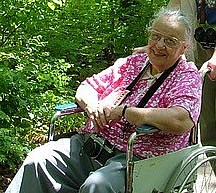 Ruth White Young, 100, of Overland Park, KS, passed away April 20, 2020 at The Forum in Overland Park. Ruth was born February 2, 1920, in Waukesha WI, to Eugene A. and Aimee Bushman White, the 2nd eldest of four siblings. She graduated from the University of Wisconsin with a degree in pharmacy and from the University of Minnesota with a degree in nursing. She worked for Milwaukee Hospital as a pharmacist, then joined Frontier Nursing Service in Kentucky during a time when patients often arrived on foot and emergency personnel were sometimes dispatched on muleback. She never did learn to drive a car. Her later career included teaching and nursing at Bethany Hospital and the University of Kansas Medical Center. In 1954 she married Ross Sinnett Young and they began their married life in Kansas City, Kansas where they resided together for the next 48 years. During this time Ruth led a Girl Scout troop and served as a volunteer Braille teacher at the Kansas State School for the Blind for over 30 years. Ross served in the Pacific Theatre of World War II and spent the remainder of his career as a postal clerk. Ruth was preceded in death by her husband and her three siblings. Ruth is survived by her son George Young and his wife Susan Bensema Young of State College, PA. Her church was Colonial Church of Prairie Village, 7039 Mission Road, Prairie Village, KS. Burial in Leavenworth National Cemetery, Leavenworth KS.
See more See Less

In Memory Of Ruth White Young