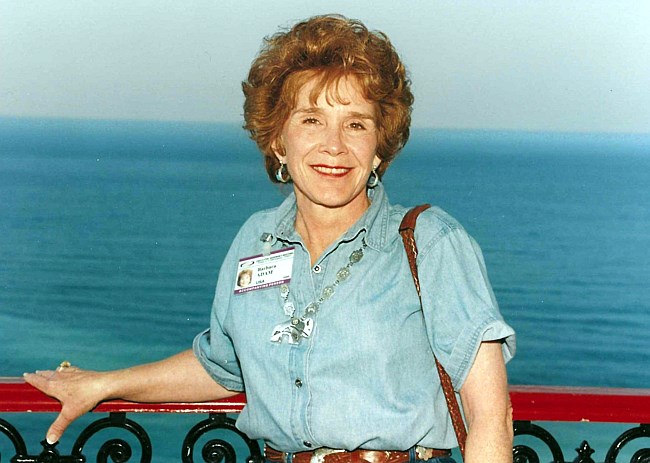 Barbara Ann (Mills) Adam, of Overland Park, Kansas, died peacefully on August 1st, 2022. She was in the company of her caregivers at The Heritage of Overland Park, with her friend and companion Sandra Glaser by her side. She was 87 years old. Barb was born April 4th, 1935, on the Mills family farm, located at present-day Shawnee Mission Parkway and Belinder in Johnson County, Kansas. Her mother Helen (Hoffman) Mills and her father James Martin Mills moved their family shortly thereafter to a much larger farm far to the south, at what is now the Mills Farm subdivision in Overland Park. Barb grew up there, the oldest of four children, helping her mother and grandmother with cooking, cleaning, and gardening. She enjoyed 4H club and listening to the radio with her family. Barbara became a student at Shawnee Mission High School because her mother, a teacher in Shawnee Mission, preferred that high school for her children. While attending and playing clarinet in the marching band, Barbara met her future husband, Jim. She graduated in 1953 and followed Jim to the University of Kansas. Barb majored in education at KU and was a member and then President of the Chi Omega sorority. She and Jim were married in December 1956. Barbara finished her final year of college and earned her degree from the University of Dayton, where she and Jim were stationed for his stint as a 2nd Lieutenant and mechanical engineer at Wright Patterson Air Force Base. While Jim served the USAF, Barb taught in a one-room schoolhouse on the base. When Jim’s duties were complete, the couple moved back to the Kansas City area. Jim began a long career at Black and Veatch, and Barb taught for a time at Linwood Elementary School in Overland Park, until the birth of their first child in 1961. From that point on, Barbara became a homemaker, mother, grandmother “BaBa”, and an extraordinary volunteer and citizen of greater Kansas City. In 1964-1965 Barbara served as President of the Kansas chapter of the Chi Omega alumni association. After joining the Junior League of Kansas City in the 1960s, Barbara quickly became a stalwart there, spending hundreds of hours volunteering at the Junior League Thrift Shop and chairing the creation of the Junior League’s first Company’s Coming cookbook published in 1975. In the 1970’s Barbara became the first female Senior Warden of the Vestry at Christ Episcopal Church in Overland Park. She also served on the board of the Kansas City Philharmonic Orchestra and was a Den Mother for the Cub Scouts. When her husband became a partner at Black and Veatch in the late 1970s, Barbara began organizing events for the partners’ wives, who all became fast friends. During Jim’s career, Barb was a key social partner, serving as hostess for hundreds of events, both in her own home and even abroad, as Black and Veatch became a world-wide company. Barb was a long-time member of the Kansas State Chapter of the PEO sisterhood. In later years she served on Boards of Directors for Powell Gardens, as well as Kansas City Public Television which she chaired. In 1993 Barbara was ordained as the first female Deacon at Christ Church, serving there in pastoral care for many years. In 2006 she was assigned as a Deacon to St. Thomas the Apostle Episcopal Church in Overland Park, and while in residence in Tucson, Arizona, served as Deacon for St. Phillip’s of the Hills Episcopal Church. During that time, she also served as Episcopal Chaplain at Research Hospital in Kansas City, Missouri. Barbara was a Johnson County Master Gardener featured on many Kansas City Garden tours. She was an amazing cook, inspiring the Cooking with BaBa cookbook, written by her granddaughter Abby. She was a beloved wife, mother, grandmother, a friend to hundreds, and a pastor to all. Barbara is survived by her sons and daughters-in-law Jim and Diane Adam of Lenexa, Blair and Jean Adam of Overland Park, and Matthew and Kerry Adam of Overland Park. Also surviving Barbara are nine grandchildren: Danielle (Andrew) Cross, Austin (Katie), Abby (Tim) Pullin, Riley, Spencer, Hayden, Madeleine, Matthew, and Trevor; four great-grandchildren, Colt and McKenna Adam and Evelyn and Meyer Cross; brother Jim (Susan) Mills; sisters-in-law Rochelle Silvers and Mary Sue (Bill) Zercher ; and twelve nieces and nephews and all their families. Barbara was preceded in death by her husband of 60 years Paul J. Adam Jr. (Jim); her parents Helen and Jim Mills; her brother Bill Mills; her sister Nancy Langley; and her nephew Timothy Zercher. A memorial service is scheduled for Saturday, August 13th at 2:00 pm at St. Thomas the Apostle Episcopal Church in Overland Park. In lieu of flowers, the family suggests contributions to the St. Thomas Garden Fund, 12251 Antioch Rd, Overland Park KS, 66213 or to the Kansas City Alzheimer’s Association, 3846 W. 75th St, Prairie Village, KS 66208. Please include Barbara Adam in your memo line. Fond memories and expressions of sympathy may be shared at www.mtmoriah.net for the Adam family.
See more See Less

In Memory Of Barbara Ann Adam