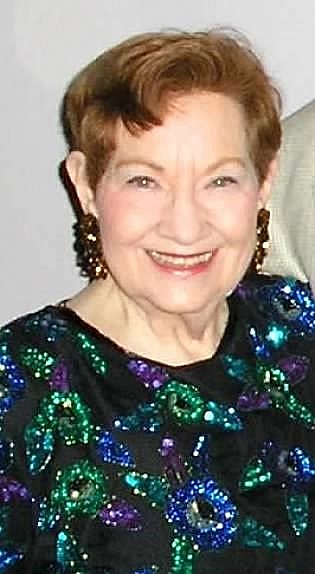 Billie R. Mahoney, age 94, of Kansas City, Missouri passed away on Monday, January 31, 2022. Billie was born November 23, 1927. Everyone who knew her would agree that Billie Mahoney was one of a kind. She grew up in an era when women were largely relegated to the home, but that path was not for Ms. Billie. A dancer from a very young age, she forged a career of many years and highlights, working side by side with the greats of the dance world, recognized by them not only as a stellar performer, but also as a teacher, choreographer, organizer, and dance notation specialist; in the words of the conductor of a senior orchestra in which she was a drummer, “Billie Mahoney is a force of nature.” A fiery redhead with a temper to match, Billie left Kansas City to go to New York City in 1950. There, she performed in many venues, including the revival of the Broadway show Pal Joey, with Bob Fosse in the lead role. She taught dance and dance notation at the Julliard School and was known as one of the big three "modern jazz" dance teachers in New York in the 1960s alongside the luminaries Matt Mattox and Luigi. One of Billie’s more exotic talents was twirling two batons, which she did in her early club acts and in performances with the Ringling Brothers and Barnum & Bailey Circus. In 1967, she played the character Billie Rose Carson in the movie “The Night They Raided Minsky’s,” directed by Norman Lear and also starring Jason Robards, Britt Eklund, and Elliot Gould. While earning her master’s degree in Media Studies from the New School for Social Research, Billie germinated the idea for the weekly television show “Dance On with Billie Mahoney,” which she produced and hosted, over the years interviewing more than 400 luminaries from all disciplines of dance. Billie returned to her hometown Kansas City in 1992 and is most known for her promotion of tap dance, a discipline she started at age 4 and continued throughout her life. Her tap dance company, the Billie Mahoney Dance Troupe, for many years performed at a variety of venues and events, including Kansas City Dance Day at the Kansas City Ballet. Almost every year, Billie organized celebrations of National Tap Dance Day, the holiday honoring Bill “Bojangles” Robinson’s birthday. She was one of the first recipients of the Legacy Award from the organization Dancers over 40 in 2009, which recognizes lifetime contributions to dance and the organization. In 2017, the national service organization Dance/USA honored Billie with the Champion award. Lisa Jo Sagolla wrote in Dance/USA’s From the Green Room: “Is there anyone else in the dance world who has served as Luigi’s jazz-dance teaching assistant, produced her own television dance-talk show, taught Labanotation at Juilliard, and performed as a baton-twirling tap dancer on the “Ed Sullivan Show,” in personal appearances with Bob Hope, and on tour with Lionel Hampton? Probably not.” https://www.danceusa.org/ejournal/2017/05/09/billie-mahoney-champion-2017 Billie Mahoney danced for most of her life, performing the shim sham (a traditional dance that all tap dancers should know, she told us) with Lonnie McFadden and others at a celebration of National Tap Dance Day at Kansas City’s Black Dolphin jazz bar in 2020, when she was 92 years old. The dance community has truly lost a treasure, but it is with great admiration and pride we say Dance on Billie—we will always remember you. A celebration of Billie’s life will be held on March 14th, 2022, 6:30-8:30PM in the Michael and Ginger Frost theater at the Kansas City Ballet. Masks and proof of vaccination are required.
See more See Less

In Memory Of Billie R. Mahoney