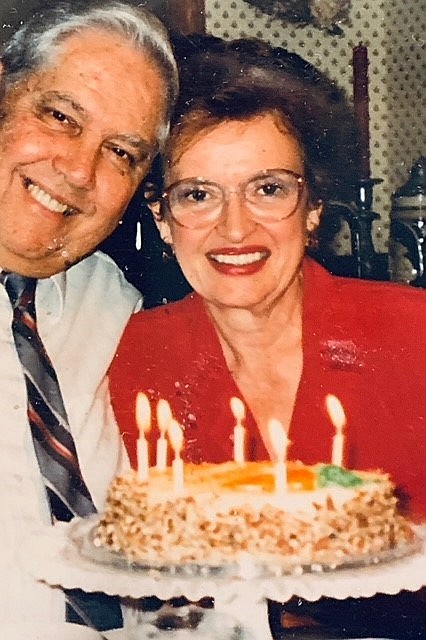 Frances K. Petri passed away peacefully in Shawnee, KS in the early evening of January 15, 2022, ending a long a journey with Parkinson's disease. She was born to Maybelle (Mabel) B. Kingcade and Charles (Charlie) E. Kingcade, on August 16, 1928. She and her younger sister, Freda, enjoyed many years on the 140-acre family farm, where Charlie raised beef cattle. Attending high school in Louisburg, KS, Frances graduated at 16 years-old, valedictorian of her class. In 1949, she graduated from Ottawa University, Ottawa, KS with a BS degree in Business and Economics - and that same year married, Burl D. Harmon. In 1956, Frances and Burl delighted in the birth of their first child, Daniel Charles Harmon, and in 1958, joyfully welcomed their second child, Nancy Kay Harmon. Frances was a brilliant homemaker, voracious reader and dedicated, loving mother...blessed with endless energy and strength. In 1983, Frances happily married Richard (Dick) L. Petri and embraced his daughters, Anne Petri Graf and Mary Petri West. In later years, she earned an MS degree in Special Education, specializing in learning disabilities, where she was employed for 20 years, retiring from Psychological Services in the Kansas City, MO School District in 1993. After retirement, Frances and Dick traveled extensively to an abundance of locations, nationally and internationally, such as Hawaii, China and several countries throughout the continent of Europe. She also thrived on entertaining family and friends - hosting many warm, memorable holiday gatherings. Frances was a dedicated member of Village Presbyterian Church and enjoyed singing the in VPC church choir for a number of years. Actively involved in several organizations, she was a member of the Leawood Women's Club, P.E.O. Sorority, the Council on Exceptional Children and the National Association of School Psychologists. She was preceded in death by her parents, Mabel and Charles Kingcade; her husband, Dick Petri; her son, Dan Harmon and her beloved kitties, Tuxedo and Jasmine. She is survived by her daughter, Nancy Harmon; granddaughter, Sara Harmon (Dan's daughter), stepdaughter and husband, Mary and Chris West; stepdaughter, Anne Graf; and her sister and brother-in-law, Freda and Bill Schmitz, their children and families. Frances, Mom, Grandma... we love you so much... and will miss your bright smile and loving heart. A Celebration of Life for Frances will be held in the spring of 2022, in a private, family service at Village Presbyterian Church.
See more See Less

In Memory Of Frances K. Petri