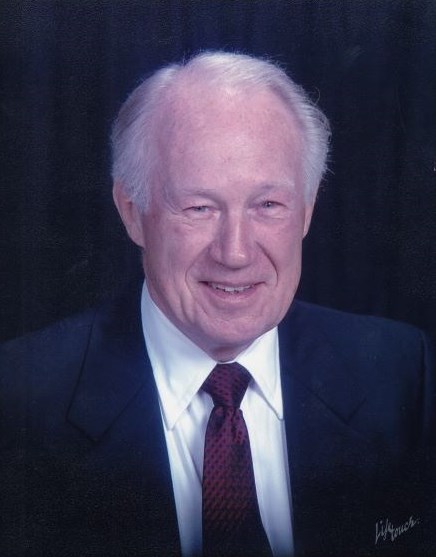 Dr. James Michael Flynn, MD, 94 passed away peacefully on January 14, 2023 at his home surrounded by his loving wife and children. James Flynn was the beloved husband of Frances Faye Fronk with whom he shared 69 years of marriage. James Flynn was born August 26, 1928 in Omaha, Nebraska to Rose Dergans Flynn and James Michael Flynn, and he was the eldest of their two children. He attended elementary and high school in Soldier, Iowa. James Flynn completed his undergraduate degree at the University of Iowa with an emphasis in molecular biology in 1951. He then furthered his education receiving his Medical degree at the University of Iowa in 1956. After receiving his medical degree, he joined the US Naval Air Station School of Aviation Medicine in Pensacola, Florida and became a Naval flight surgeon in 1957. In 1961, he transferred to the US Naval Reserves with a permanent rank as Captain. He proudly served 21 years of active and inactive military service. Jim Flynn received his certification in Anatomic and Clinical Pathology in 1961. He was employed at Research Medical Center in Kansas City, Mo and served as Director of Laboratories and Director of Medical Technology. He retired in 1993. Post retirement, Jim Flynn stayed actively engaged in civic activities and organizations: The Research Foundation, Research Medical Center, Kansas City MO, Board of Directors, Officer and a member of the Executive Committee -Treasurer and Finance Committee Chair, Investment Committee Chair from 2006-2014. Jim remained on the Investment Committee as a member through 2018. Jim’s expertise and involvement with investments helped position the Research Foundation to make a real difference in nursing and other community health programs in perpetuity. Jim was appointed as an honorary board member to The Research Foundation board of directors in 2019. Jim Flynn was also active in the Healthcare Foundation of Greater Kansas City, Community Advisory Committee, appointed by Board of County Commissioners, Johnson County Kansas, Nelson-Atkins Museum of Art Society member, Presidents Circle of Linda Hall Library, Parishioner of St. Ann Catholic Church, Prairie Village, KS 1961-2023, and Kansas University Medical Center Alumni. He is preceded in death by: parents, Rose Dergans Flynn and James Michael Flynn, sister, Leona Flynn Collins. He is survived by his loving wife, Francie Flynn: their seven children, Susan Flynn (Eric), Karen Wirtz (Ronald), Kathleen Gloekler (Mark), Julia Flynn, Jay Flynn, Molly Flynn, and Meredith Flynn (Tomas) along with their six grandchildren: Ian Houts (Jacqueline), Carolyn West (Jonathan), Lauren Gloekler (Canaan), Melissa Gloekler, Conner Flynn Walker and Tomas Nicolas Flynn Pascual. In addition, five great granddaughters. Jim Flynn lived each day full of meaning, purpose, and focus. He balanced many responsibilities: as an expert pathologist, active-duty reservist in the Navy and farm owner, as well as a beloved husband and father. He enjoyed traveling, sailing, astronomy, reading and a wide genre of music. He was our mentor and confidant, providing support and guidance. Family was consistently priority for him and his time was his gift to all of us. His laughter and smile were contagious. He touched so many lives in the community with his compassion and generosity. Jim (Dad) was practical, logical and rational; tears would well up in his Irish eyes as he let emotions show. He was our protector, anchor, teacher, and moral guide. His sense of loyalty and integrity will live on through his family. Jim was a beloved husband and cherished father whom we will miss deeply and hold forever in our hearts. Visitation will be from 5-7 pm on Friday, February, 3, 2023 at St. Ann Catholic Church, 7231 Mission Rd., Prairie Village, Kansas. Mass of Christian Burial will be at 11am on Saturday, February 4, 2023 at St. Ann Catholic Church. https://stannpv.org/jimflynn In lieu of flowers, the family suggests contributions to the KU Alzheimer’s Disease Center via (https://kumc.edu/research) attention KU Alzheimer’s, Linda Hall Library (https://www.lindahall.org), Glioblastoma Foundation (glioblastomafoundation.org) or charity of your choice.
See more See Less