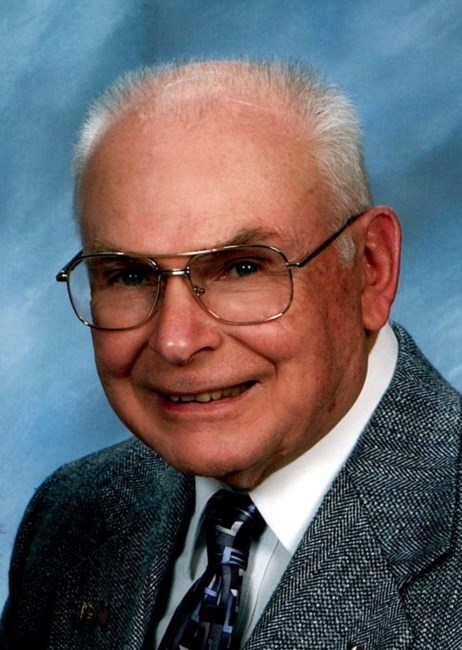 Louis James Stock was born the middle child of five brothers. He grew up in the Saint Francis Parish in Saint Joseph, Missouri. His father was a baker so his early years were spent helping his dad after school. He attended Christian Brothers High School and then attended trade school to learn how to be a machinist. After two years in the Army at the end of WWII he came back to Saint Joseph and found the love of his life while roller skating. He married Margaret Jagodzinski in 1950 and had four sons. He spent most of his time helping the boys through the Scouting program from Cubs to Boy Scouts. He participated and organized many Catholic programs for Scouting. He also enjoyed being a member of Archbishop O'Hara Knights of Columbus. Golf seemed to be a passion in later years and he was always ready to help and organize any event or fundraiser. Louis adored his children and grandchildren and had a special relationship with his brothers. He had life-long friends from childhood, Scouting and Knights of Columbus. He is remembered as a good and kind man who loved God, Country and Family. He enjoyed many wonderful years with friends and family and passed at age 95 and was married 71 years. He is preceded in death by his son Paul Stock and is survived by his wife Margaret Stock, three children Michael Stock of Fairborn, Ohio, Gregory Stock of Orlando, FL, and Phillip Stock and wife Tammy of Blue Springs, MO; his four grandchildren: Joseph Stock, Joshua Stock, Jessica Arrandale and husband Brad, Sarah Fristoe and husband Dewey; two great grandchildren, Henry and Oliver Fristoe, his brothers Francis (Doc) and wife Dorothy Stock along with Leo Stock II and wife Lee. Visitation will be at 6-8 pm at McGilley State Line Chapel in Kansas City, MO, which will include praying of the Rosary at 7:30 pm on Tuesday, August 9. Mass of Christian Burial will be held at Saint Robert Bellarmine in Blue Springs, MO on Wednesday, August 10 at 10 am. Interment will follow at Mount Olivet Cemetery in Raytown, MO. Donations may be made in Louis' memory to Veterans Community Project, builders of the tiny homes for veterans (https://www.veteranscommunityproject.org/donate).
See more See Less

In Memory Of Louis James Stock