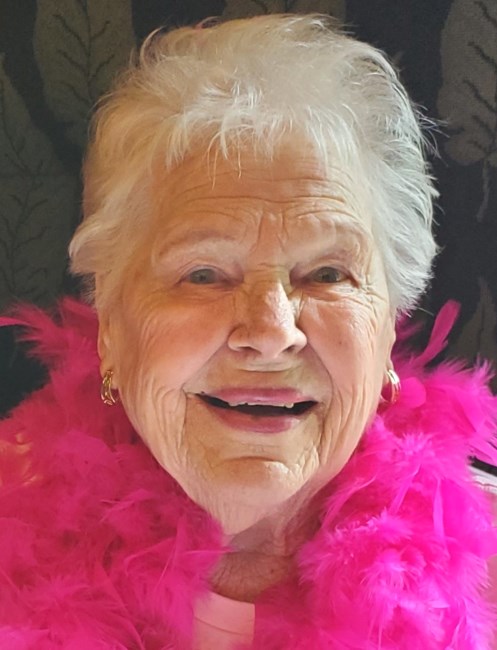 Dootsie Collins, 91, North Kansas City, Missouri passed away on Saturday, January 14, 2023, with family by her side at Primrose Retirement Community. Dootsie was born June 27, 1931, in Columbia, Missouri, the daughter of John and Carrie Hopper. She was preceded in death by her parents, her husband Gene, her sister, Dixie Ferrara and her brother Monroe Hopper. She married Gene Collins on May 22, 1951. They were married 61 years until his passing in 2012. Dootsie and Gene moved to Kansas City North from Columbia in 1954 where they raised their daughters, Connie and Carol. Dootsie spent her adult years as a homemaker spoiling her husband, girls and later her grandchildren. She loved decorating her home, cooking, baking and trying to sew. She was naturally a happy person and seemed to draw people to her with her quick wit, good-naturedness and sincere kindness towards them. After Gene retired, they moved to “the farm”, 40 acres in Rayville, Missouri. Dootsie spent many hours toting grandkids back and forth and made their summers full of lasting memories. She enabled her daughters to pursue careers and would sometimes come to town and clean their houses to “catch them up.” She was always ready to encourage with, “Yes, you can do it. Ain’t No Hill for a Climber.” No one in the world compared to her. Dootsie is survived by her two daughters. Connie Solomon (Tom) and Carol “Tess” Garrison both of Kansas City; grandchildren, Ryan Ash (Mindy) of Platte City, Missouri, Julie Hovorka of Pleasant Valley, Missouri, Gena Agron (Todd) of Parkville, Missouri, Shea Wilper (Jeff) of Oak Grove, Missouri, John Garrison of Kansas City, Missouri and David Britt (Sandy) of Liberty, Missouri. She is also survived by her great-grandchildren Kade Hovorka, Ashlyn and Grace Agron, Johnny and Bo Wilper, Charlotte Ash, Xander Garrison and Brody and Cooper Britt. She also leaves behind many nieces and nephews, some old friends and new friends from Primrose Retirement Community and Traditions Hospice. Memorial Visitation is scheduled from 1:00 PM to 3:00 PM, Monday, February 20, 2023, with the Memorial Service at 3:00 PM, at McGilley Antioch Chapel. In lieu of flowers, memorial contributions may be made to Traditions Hospice.
See more See Less