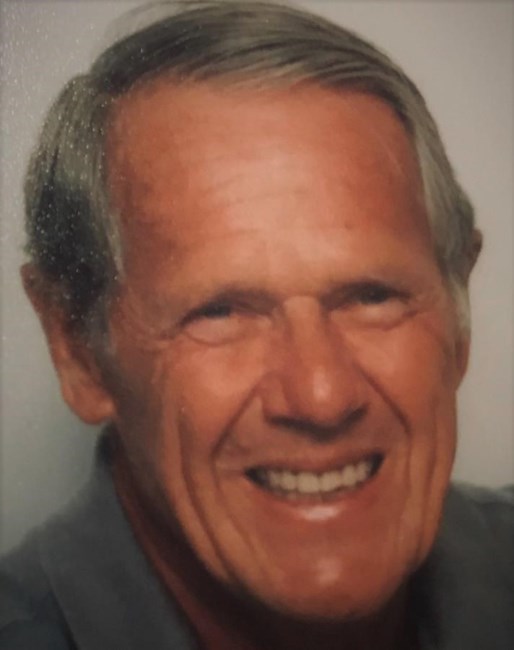 Ralph James Anderson went to his heavenly home on Thursday, April 16, 2020 with his loving wife, Mary Lynn, at his side. He was in Hospice care at home at the time, and was surrounded by his loving daughter, Amy, a dear friend, Marilyn, and his beloved pets. He died of Heart Failure. Ralph was born in Oak Park, IL on September 13, 1930 to Ralph Julius Anderson and Nellie Louise Meyers. He had one sister, Patricia Anne (deceased 12/24/2009), and many beloved aunts, uncles and cousins. He graduated from Evanston High School and went on to obtain a Bachelor of Science Degree in Economics from Northwestern University. He often spoke fondly of his close high school friends and their antics, of which he was a willing participant! At Northwestern he was a proud member of Sigma Alpha Epsilon, where he made many lifelong friends, including two fraternity brothers who were not in his class, Mary Lynn’s beloved Uncles John and Crawford. His education at Northwestern was interrupted by the Korean War. He served proudly in the Air Force and then returned to finish his education at Northwestern. Ralph remained a dedicated Veteran and patriotic American to the end of his life. After his graduation from Northwestern, Ralph chose a career in the paper industry. As he became proficient in the sales of specialty papers, he was given an opportunity to pursue further studies in Graphic Arts in Offset Lithography at the Rochester Institute of Technology. Later in his career, he was given an opportunity to attend the University of Connecticut, where he studied Industrial Quality Control, Advanced Statistical Methods and Experimental Design. As a leader in the Industrial Psychology Field at James River/Crown Vantage Paper Co., Ralph wrote many industry magazine articles and made many speaking engagements with his team. After forty years (more or less), Ralph retired from the paper industry and went to work for AT&T. Once retired from there, he went on to pursue employment as a substitute teacher in Special Education in the Raymore-Peculiar School District; one of his most rewarding ventures. Three children were born to Ralph’s first marriage: Tom, Michael and Amy. His love for them was unconditional and ongoing. On December 28, 1984 Ralph and Mary Lynn were united in marriage at St. Peter’s Episcopal Church in Ladue, MO. At that time Ralph became the adored stepfather of Mary Lynn’s son, Scott Mueller, and the feeling was mutual. Ralph’s and Mary Lynn’s love for each other was apparent to all, and a bond that endured and thrived through all of their life’s challenges. They believed from the beginning that God wanted them to be together. Ralph was a very spiritual man, always seeking God’s Will. This path was made easier for him by his Higher Power and all of his friends in his thirty-seven years of sobriety, where he shared his experience, strength and hope. On July 21, 2002, Ralph was confirmed in the Episcopal Church as a result of his deep friendship with The Rev. Dr. Douglas P. Johnson, Rector (Fr. Doug). This friendship and the ensuing Confirmation Classes resulted in many “man’s church” issues being resolved for Ralph, especially in terms of his beloved mother. Ralph’s devotion remained steadfast to the end when Fr. Doug gave him the Last Rights. After his third retirement, Ralph found a new & great joy in writing fiction (when he wasn’t playing golf, poker, or bridge) and joined a writer’s group. He wrote many entertaining short stories and five historical novels – all unpublished! His great sense of humor will be missed. Besides Mary Lynn, his children, stepson, grandchildren, sister-in-law (Susy Ferril), nieces, nephews, good friends, and his Thursday night poker group, Ralph leaves two spoiled dogs and two spoiled cats to mourn his passing. Ralph believed deeply in the basic goodness of mankind, being useful and in trying to live a life of honesty, purity, unselfishness and love. In lieu of flowers, donations to Wounded Warriors, Heartstrings Community Foundation, First Call KC (formerly National Council on Alcoholism), or Crossroads Hospice would be appreciated.
See more See Less

In Memory Of Ralph James Anderson