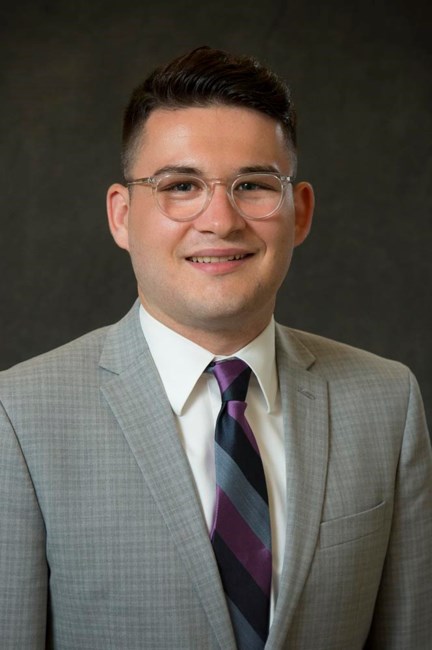 Remington Rea Williams, age 25, of Kansas City, Missouri passed away on Wednesday, June 8, 2022. Remington was born September 29, 1996. A visitation for Remington will be held Tuesday, June 14, 2022 from 6:00 PM to 8:00 PM at Mt. Moriah, Newcomer and Freeman Funeral Home, 10507 Holmes Road, Kansas City, MO 64131. A funeral service will occur Wednesday, June 15, 2022 from 2:00 PM to 3:00 PM at St. Andrews Episcopal Church, 6401 Wornall Road, Kansas City, MO 64110. A reception will occur Wednesday, June 15, 2022 from 3:00 PM to 5:00 PM at UMKC Student Union Room 401, 5100 Cherry St. -Parking at Cherry Street Garage 5009 Oak Street, Kansas City, MO 64110. Remington Williams, JD remembered as the most kind human. He was the student representative to the University of Missouri System Board of Curators. Remington was tragically killed Wednesday June 8th by a drunk driver, eliciting emotional reactions from all that knew him. Williams was appointed by Gov. Mike Parson as student representative to the board in July 2020. He was a recent graduate of the University of Missouri-Kansas City School of Law, where he was a member of the Law Review and Honor Court. He was completing his master of business administration degree from the University of Missouri-St. Louis. The UM System's Office of Legal Counsel had recently extended an offer for Williams to serve as a fellow. Williams was known to faculty and students as Remy, said Nancy Levit, UMKC School of Law associate dean, who was Williams' faculty advisor. Williams was on the editorial board of the Law Review, the school's premier law journal. "Remy could have gone anywhere to law school," Levit said. "He always charted his own path." He chose UMKC because he loved the city and wanted to make an impact in his hometown, Levit said. "He rocketed to prominence" as student representative to the curators, she said. “Remington was an outstanding individual and a tremendous asset to the Board of Curators,” Board chairman Darryl Chatman said in a statement. “He was actively engaged with the students at each of our four universities and worked to amplify their successes, promote their stories and ensure their concerns were heard. Remington was the best of us.” Williams graduated from the Pembroke Hill School in 2015. He was an honors student, a member of the football and baseball team, and a proud member of the Choir and Madrigal Singers. He also was a member of the Pembroke Hill Advisory Group. With over 400 hours of volunteer work, he earned the President’s Volunteer Service Award in each of his four years at Pembroke. Williams earned his bachelor's degree in business administration and Spanish from Georgetown (Ky.) College in 2019. While there, he served as student body president and president of his fraternity. He also graduated from the National Leadership Conference in Shelby, Michigan. Remington Williams was also an Eagle Scout. Immediately following the funeral, we are honored to have the University of Missouri System and UMKC hosting a reception. UMKC Student Union 5100 Cherry Street, Room 401 Parking will be in the Cherry Street Garage which is at 5009 Oak Street. In lieu of flowers the family requests contributions to the Remington Williams, JD Memorial Fund. Send to: Colette Fry-Williams 725 S 80th Street Kansas City, Kansas, 66111
See more See Less

In Memory Of Remington Rea Williams