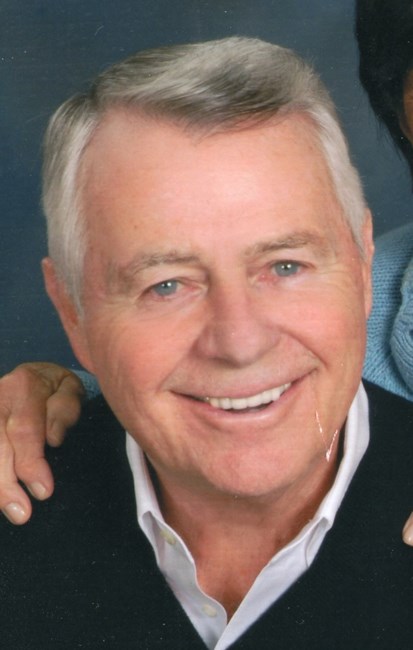 Richard R. (Dick) Smith passed away Thursday, Jan. 23, 2020 at Colonial Village in Overland Park, KS. Dick was born on May 3, 1931 in Kansas City, MO to Marie and Ray Smith who preceded him in death along with his sister Betty Barlow and brother Bob Smith. He graduated from Bishop Lillis High School in 1948 and attended Rockhurst University. He married Virginia Rose Lembo on March 31, 1951. Dick was president and owner of Dick Smith Ford for over 60 years until he retired and sold the dealership in 2016. He served as president of the Greater Kansas City Motor Car Dealers Association and was on the board of directors for the Missouri Automobile Dealers Association and the National Ford Dealer Council. He represented the state of Missouri on the National Automobile Dealers Association Board of Directors. He also was a member of Church of the Nativity, a century member and former president of Blue Hills Country Club, and was one of the original red coaters for the Kansas City Chiefs. Dick is survived by his wife of 68 years, Virginia, and his five children, Michael (Kathleen), Mark (Robin), Phillip (Melinda), Susan Vogliardo (Joe) and Barbara Biel (Greg). He was blessed with 13 grandchildren -- Jeff Smith (Brooke), Richard Smith, Matt Smith (Lindsey), Stephanie Miller (Ben), Amy Holsopple (Scott), Brandon Smith (Mary), Kyle Smith, Jennifer Vogliardo, Tiffany Cross (Bill), Katie Bartlett (Dave), Andrew Vogliardo (Lisa), Alex Biel and Natalie Biel -- as well as 13 great grandchildren -- Parker, Jack, Luke, Easton, Hadley, Georgia, Jillian, Coen, Charlie, Ellie, Henry, Liam and Theo. Dick is also survived by his brother-in-law Everett Mealman. Funeral services are private. In lieu of flowers, memorial contributions in Dick’s name can be sent to Holy Name Catholic School, 1007 SW Blvd., Kansas City, KS 66103.
See more See Less