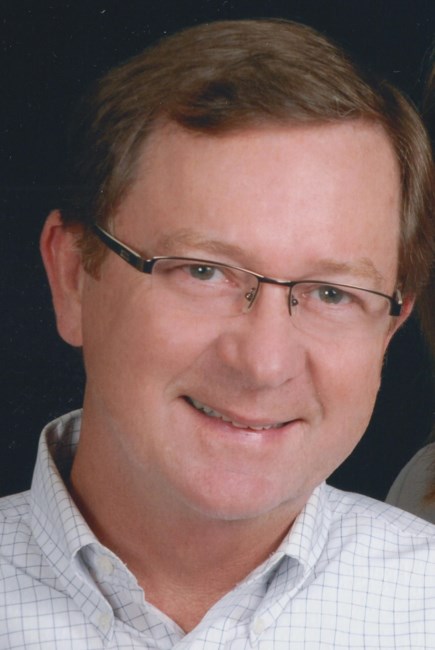 Terry A. Hainje, 69, passed away on July 23, 2021. He was surrounded by his loving family after having fought a courageous 19-month battle with cancer during which he never gave up or gave in. Terry was born October 1, 1951, and attended Christ the King and Rockhurst High School in Kansas City, MO, and Regis College (Denver). Terry spent the majority of his career in commercial real estate sales, earning his Certified Commercial Real Estate Member (CCIM) designation. He also worked in commercial real estate appraisal as a certified appraiser. More importantly, Terry was a family man. He deeply cherished time spent with his family, both his close, immediate family members, as well as his large extended family. He loved to travel with a special fondness for the vacations spent with those he loved. He showed a talent and appreciation for music at a young age, playing organ in the Daze of Nite high school band and attending many, many concerts over the years. His second passion was golf, especially golf trips with his “Dudes of Magnitude.” He had desperately hoped to become healthy enough to be able to play again. Additionally, he was an avid fisherman, enjoying many “Fish and Chips” trips with the boys, along with frequent local fishing excursions. Along with his outdoor interests, Terry was a long-time member of the Rank Investors investment club, rightly proclaiming himself to be the “Prophet of Profits.” Terry was funny, kind, gentle, patient, charitable and loving. He lived life with zest. He was a friend to all and stranger to no one. His infectious laughter will be remembered by all who knew him. He was a loving husband, father, brother, friend and neighbor and he will be greatly missed by so many whose lives he touched. Terry is survived by his wife of 35 years, Julie (Cotter); their three children: Jessica (Marina del Rey, CA), Matthew (San Francisco) and Danny (Overland Park, KS); and his sister, Gayla Kellogg (Curt) (Overland Park). He is also survived by numerous sisters- and brothers-in-law: Jeanne Bates, Robert and Laura Cotter, Nancy and Tom Lund, Ed Cotter, John and Kelly Cotter, and many nieces, nephews, grandnieces and grandnephews. Terry was preceded in death by his parents, John and Helen Hainje; his brother-in-law Robert Bates; and sister-in-law Barbara Rice-Cotter. Rosary will be at 4:00pm, with Visitation following until 7:00pm on Wednesday, July 28 at Mt. Moriah, Newcomer & Freeman Funeral Home, 10507 Holmes Road, Kansas City, MO. Mass of Christian Burial will be 10:00am Thursday, July 29 at Cure of Ars Catholic Church, 9401 Mission Road, Leawood, KS. Facial masks requested. Funeral live streaming available at www.Cureofars.com/funeral. In lieu of flowers, donations in Terry’s memory can be made to the Foundation for Children in Need, P.O. Box 1247, Arlington Heights, IL 60006, or to Kansas City Hospice Foundation, 1500 Meadow Lake Parkway, Suite 200, Kansas City, MO 64114.
See more See Less

In Memory Of Terry Allen Hainje