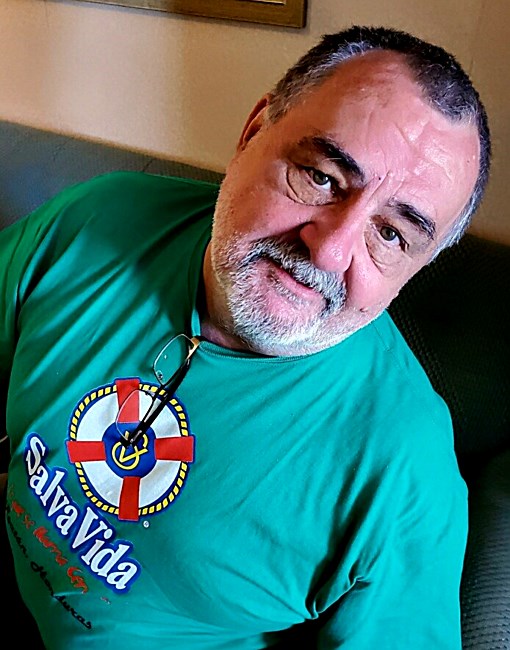 Thomas James Gorcie, Age 65, of Brookshire, Texas, passed away peacefully on July 28, 2022, at 10:07 pm, surrounded by his wife, Tina, daughter, Toni Rae Craig and son, SSgt. Tyler James Gorcie, who is out of state and was connected via technology. Tom grew up in Winnipeg, Manitoba, Canada and moved to the United States for his Professional Ballroom Dancing career. He met his wife, Tina, at an Arthur Murray Studio in Buffalo, NY in 1982. They relocated to Houston, Texas, in 1985, for Tina’s full-time employment and were married December, 12, 1987. Tom continued to teach and compete professionally. As their children were born, and Tom’s health began to decline affecting the comfort of his dancing, he became an Assistant Golf Pro at Bear Creek Golf Course in Houston where he was employed until his health, once again, could no longer accommodate that position. He became a stay-at-home Dad while Tina traveled in her position. As the children grew and moved on with their lives, his greatest joys were to see his daughter’s graduation from college, her marriage, her two amazing boys, her successful career and his son’s achievement of becoming a US Marine, military career and graduating on the Dean’s list from college. He will always be their Angel watching over them. He became a US Citizen purposely to enjoy traveling with Tina for as long as he could, and that, they did, cruising extensively nearly every month. He was in ill health for years and was a fighter, being in remission from bone marrow cancer for two years, but very recently, began to become weaker. His wish was to have his ashes scattered from a cruise ship, which will be granted. Tom was predeceased by his father, Stanley Thomas Gorcie, his mother, Alice (Kuyan) Gorcie. Tom is survived by his Wife of 34 years, Tina M. Gorcie, Daughter Toni Rae Craig (Hunter) and Grandchildren Nolan and Maddon and Son SSgt. Tyler James Gorcie. Where distance and absence had separated him, he also leaves behind son Brent Gorcie, Destiny Gorcie, Grandchildren Ella Gorcie (mom Emily) and Brantley Escobar-Gorcie. Tom also has two sisters living in Canada, Tanice Ann Goodchild (Larry) and Glenda Marie Gustin (Darren) along with their children, great nieces, and nephews. A Celebration of Life will be held in honor of Tom as opposed to traditional funeral services. Still in planning stages, we are working on something we know Tom would have particularly enjoyed and will communicate once details are finalized. We extend our sincere appreciation to the ER Staff, IMU and ICU Staff at Memorial Hermann Katy for their intense, but gentle care and guidance during the 48 hours that changed our lives forever, and to the Staff at Katy Funeral Home. In lieu of flowers, on behalf of Tom’s memory, you may donate to: www.give.cancerresearch.org www.kidneyfund.com ***Forever in our Hearts, miss you more than words can express***
See more See Less

In Memory Of Thomas James Gorcie