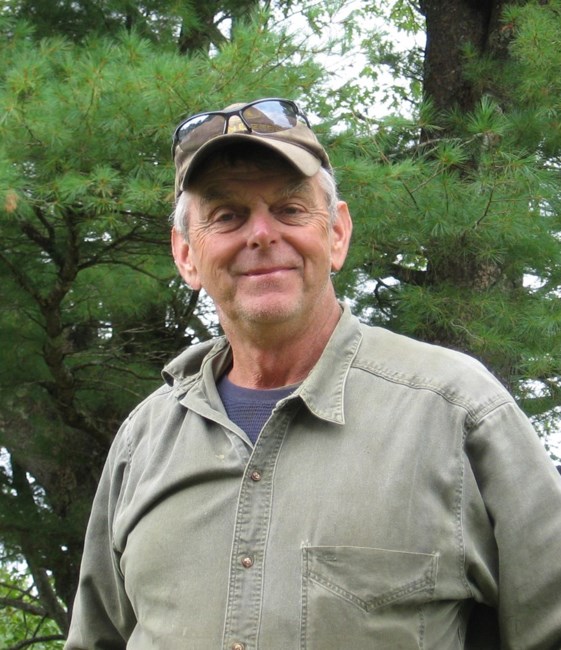 Jay C. Jacobs, age 69, a long-time resident of Harrisville, New Hampshire, died in the midst of his workday on November 18, 2021. Jay was the son of Dorothy “Dolly”(Bodwell) and Clark Jacobs of Kensington, NH. He spent many days of his formative years among the larger family on the Bodwell dairy farm, and held that place and its people as the standard of a good life.

Jay cared about fields and farms and woods and the ways that endure around these places. He lived this caring day to day, and died in his work clothes on one of those good days. On that day that no one expected would be his last, he was seen crossing town on one of his tractors to grade a driveway, enjoying lunch at the general store with the very unofficial Thursday men’s group, and putting the last pieces of his machinery under cover for the winter.

Jay came to the Monadnock Region in 1973, freshly graduated from the University of New Hampshire, with the giant opportunity before him of building and managing the Grand Monadnock Farm for the Burnham family, where they would raise Holstein replacement heifers that were sold far and wide. He and his then-wife, Diana later bought their own land in Harrisville, and made it a homestead farm. They built their house and barn, and restored the presence of a family upon land that had been in use since the earliest days of settlement, but had long been without buildings or people in residence. Jay and Diana made hay all summer, and he logged and cut firewood all winter. They raised their daughters in a simply good life, by the fruits of this labor alone.

Jay’s care for his place and his work grew into a life of real engagement with his fellow townspeople. In addition to being a friend and of use to many, he was a member of the Selectboard for many years until the time of his death, along with serving numerous other town committees and the Volunteer Fire Department, and was a member of the Harrisville Congregational Church. Jay knew his town and it knew him, with the sort of knowing that makes some sparring and disagreeableness a recognition of merit on both sides.

Jay spent the last 14 years of his life with his beloved partner, Susan Brown, who survives him. He is also survived by his daughters Jodi Farwell with her husband John and sons Rowen and Darius of Harrisville, and Hannah Wiseman with her husband Sam and sons Hal and Nick of Pennsylvania; Alfred “Buzz” Felch of Kensington, who married Jay’s widowed mother and became a father and friend added late in life; his former wife, Diana (Lake) Jacobs of Hancock; his brothers Andrew Jacobs of Idaho, and Brian Jacobs of New Mexico and their families; and many other relatives and friends who will miss his presence in their lives.

A memorial service will be held at the Harrisville Highway Barn, 18 Willard Hill Road, on Saturday, December 4 at 11 am. The family wishes all to feel welcomed and comfortable at the family farm following the service, at 97 MacVeagh Road, Harrisville. In lieu of flowers, donations may be made to the Harrisville Volunteer Fire Department or the Community Church of Harrisville and Chesham. You may also go right ahead and bring what flowers and boughs and branches December may offer.

In Memory Of Jay C. Jacobs