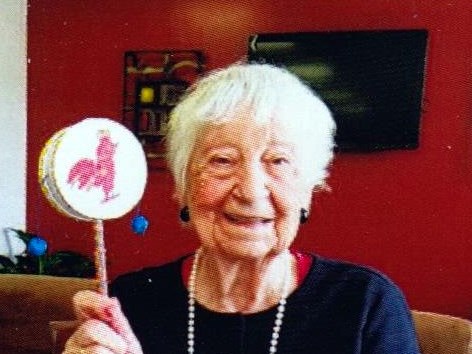 Mary P. (Luciani) Hamilton 99, a longtime resident of Winchester, NH, died on May 5, 2022 at the American House Assisted Living in Keene, NH, with Pat and Jim at her side. Her parents, Leda (Piccioni) and Pasquale Luciani welcomed their daughter into the world on September 5, 1922 in Willimantic, CT. Sadly, her father passed away when Mary was nine months old. She and her two brothers were blessed to be raised by her stepfather, Thomas Lausi and their mother, Leda Lausi. The family moved to Brattleboro, Vermont when Mary was two years of age. She attended local schools and was a graduate of Brattleboro High School in 1940. Mary went to work with the Holstein Fresian Association in Brattleboro where she worked as a secretary with the company for forty years. Mary married the love of her life, Walter H. Hamilton and the couple were married in Biloxi, Mississippi on August 5, 1945. The couple purchased their home on Keene Road in Winchester, and opened their own gift shop, "Westwinds", offering antiques, souvenirs, cement items, and religious items in a Christmas room, for ten years. Mary and Walter purchased a motorhome and enjoyed traveling and visiting every state with the exception of Alaska. In 1982, she and Walter retired after Walter became postmaster at the Turners Falls, Mass. Post Office. Mary also enjoyed making crafts, painting by number, completing word search puzzles, and reading. She was a member of the Brattleboro Emblem Club, the National Association Retired Federal Employees (NARFE), and a charter member of the Daughter of Isabella in Brattleboro. She will be greatly missed by many, especially her daughter, Pat Plante and her husband, Jim, of Hinsdale, NH; two grandsons, Seth and Luke Smalley; twelve great-grandchildren; two great-great-grandchildren; and several niece, nephews, and extended family members. Mary was predeceased by her husband, Walter, who died on their 70th wedding anniversary. Two brothers, Vivaldo Luciani and Mario Luciani, predeceased her. A celebration of Mary’s life and burial in the Evergreen Cemetery, Winchester, will be held privately by the family.
See more See Less

In Memory Of Mary Patricia Hamilton