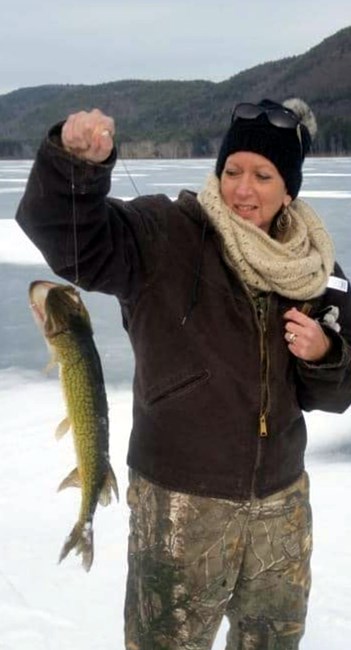 Wendy E. Abbott 52, a resident of Surry, NH, passed away at her home, surrounded in love by her family, on January 13, 2022. Her parents, Michael and Edith (Beauregard) Sundstrom, welcomed their daughter into the world on June 10, 1969, at the Elliot Hospital in Keene NH. Wendy grew up in Marlborough and Dublin, NH graduating from Conval High School in 1987. Following high school she enrolled in the Keene Beauty Academy program, graduating in 1989. As a skilled hairstylist, Wendy was the co-owner of Timeless Hair Design in Marlborough, NH for many years before opening Wendy’s Salon in Swanzey, NH, where she worked alongside her daughter, Jenna prior to retiring in 2019. Wendy’s creative abilities extended far beyond hairstyling with much of her free time spent landscaping, gardening, and decorating. Saturday mornings were reserved for yard sales where she would find furniture for refinishing projects. She took great pride in her creations which will be enjoyed by many for years to come and are a daily reminder of how beautiful she was. Wendy was also an amazing cook/baker whose greatest reward was seeing the satisfaction on everyone's face when they ate her delicious creations. Wendy was an outdoor enthusiast who loved to hike, snowshoe, fish, ATV, and kayak. She was also an avid hunter and truly enjoyed the peace and tranquility of the woods as much as the thrill of the hunt. Some of her best memories were annual hunting trips to different states with her husband Mike, the most memorable however was her last when her son Jeff came along making the trip by far her favorite. Rarely did she take the time to just relax, but when she did it was spent at the family camp in Stoddard where she would kayak or just sit and read beside the water for hours. Wendy will be greatly missed by many, especially her husband, Michael Abbott of Surry; her son, Jeffrey M. Sheehan and his wife, Vanessa, of Troy, NH; her daughter, Jenna E. Sheehan, of Marlborough; her step-children, Alyssa Abbott- Kerylow and her husband Colby of Vernon, VT, Amanda Abbott, of Surry, Michael Abbott, Jr. of Keene her grandchildren, Ava Edwards, Tanner Edwards, Ethin Sheehan, Dylan Sheehan, Siena Abbott; her mother, Edith Drinkwater and step father, John Drinkwater of Stoddard, NH; and her brother, David Sundstrom and his wife, Cassie, of Marlborough. A celebration of Wendy’s life will be held at a later date and time to be announced. For those who wish, donations may be made in Wendy’s memory to the Norris Cotton Cancer Center at Kingsbury Pavilion, 580 Court Street, Keene, NH 03431.
See more See Less

In Memory Of Wendy Ellen Abbott