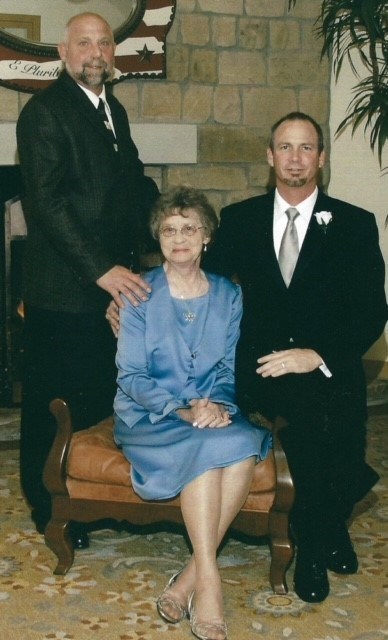 On October 27th, 2021, Mary Bloyen, at age 92, joined the Lord, her Mother, Father, several other family member & friends in Heaven. As well as many favorite pets raised over the years. She was born Mierre Pedersen to her parents, Alf Pedersen and Rakel Bruntvedt on March 29th, 1929 at Columbus Hospital in Manhattan,N.Y. Before passing, her father Alf changed their last name to Lyngar, through the courts. And Mierre Pedersen became Mary Lyngar. Mary was sent to Norway at a young age to be raised by her aunt Ruth and uncle Roland until the age of 18, when she returned to New York to pursue a career in the medical field. This is where Mary decided to give back to her community and started studies to become a nurse, and would work as a nurse for the next 40 years. In June 1952, Mary married Louis G. Bloyen in Sheboygan, Wisconsin and became Mary Susan Bloyen. Mary gave birth to two sons, Nicholas John Bloyen on February 6th, 1956, who she called Buddy, and Kristoffer Ray Bloyen, on August 4th, 1958. Shortly after, in the early 1960’s, Louis died of heart failure leaving Mary to raise two boys on her own. Mary worked a full-time job as a nurse’s aide while she attended nursing school, as well as being a single mother to her two boys. Mary raised her boys until they were old enough to join the military and serve their country, which made her very proud. She told Buddy and Kris frequently, how proud she was of the men they’d become. Mary S. Bloyen was a loving sister, mother, grandmother, great grandmother and Aunt who lived her life to the fullest. She spent her retirement years taking care of her house, yard and pets. Mary always had an adopted dog or cat to care for. She was an extremely generous person always giving to charity and never asking for anything. If fact, when she couldn’t drive anymore she donated her car to her long-time neighbors who only had one family car. When Buddy joined the Marines in 1974, to serve his country, Mary moved herself and Kris to Florida where Kris then also joined the Navy to serve his country a few years later in 1977. In 1981, Mary moved to Arlington, TX to be close to Buddy who settled there after his service. Kris would soon follow after completing his service. Arlington would become home for Mary and her son’s, there she served her community as a nurse at Arlington Community Hospital until retirement in 1994. After retirement, Mary took a job at the thrift store close to her house to fill time, this was short lived as she enjoyed her independence and it was soon back to retirement. In the 1980’s, Mary was given a computer by her sons to fill her free time. This was a very new concept for Mary and she told her sons “I don’t need this” and she asked “what would I do with a computer?” Mary came to love her computer and had a daily schedule to check emails and play games and read the Norwegian newspaper. Her favorite game being Mahjong, but also enjoyed crossword and jigsaw puzzles. The computer allowed Mary to video chat with her family in Norway. Mary loved cooking for her family, nothing made her happier then cooking big meals and having the family together. Mary loved spending time with her children and grandchildren. She also loved baseball and was a big Texas Rangers fan, who enjoyed watching them play whenever she had the chance. Mary is survived by: her sister Karin; brother Kjell; two sons, Buddy & Kris, their wives, six grandchildren and twelve great grandchildren, as well as several cousins and other family members.
See more See Less

In Memory Of Mary Susan BLOYEN