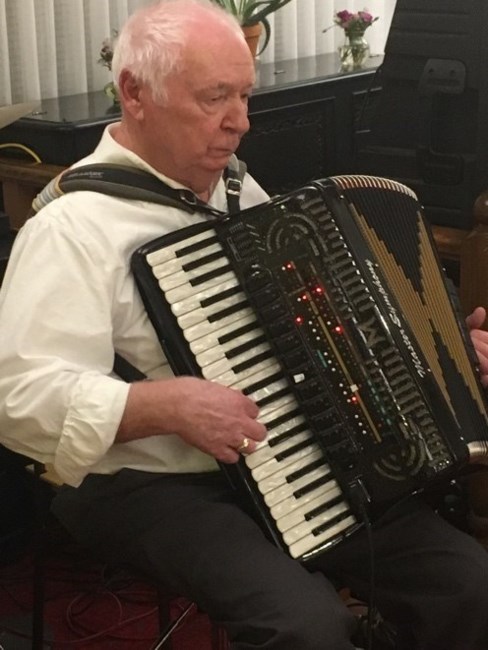 GERHARD ERKER 1936-2022 Gerhard Erker, 85, of Kelowna BC, passed away on September 16 after a brief battle with cancer. Gerhard was born on October 10, 1936 the son of Kartela Martha and Joannes Erker in Romania. In May 1956, he sailed on the “Seven Seas” ship to Canada where he began his new journey and settled in the City of Vancouver, BC, kicking off a 35 year successful career in carpentry and construction. In 1957, Gerhard met Lillian Knackstedt, and they married in 1958, and have 3 children, Brenda, Heidi and Gerhard. After retiring, Gerhard and Lillian built there dream home In Kelowna where he spent his time gardening, excelling in making wonderful wood furniture for their house and as well for all the kids and family members. He was also an active member of the Kelowna German Harmony Club where he participated in many organized activities. He enjoyed card games. He was a fantastic accordionist , self taught and only played by ear, mastering German music and has played for numerous events at the club as well as many functions In the community. Gerhard was very social gentleman and liked to joke. Gerhard is survived by His loving wife Lillian His Brother Tony Erker and wife Nani , and family (In Germany) His Brother Mathias’s widow Margot (In Germany) His Children Brenda and husband Paul Ellis, and grandchildren Tessa, Shawn and great grandchildren Every, Lily, Stella Heidi and Husband Christian Hautain and grandchildren. Gerhard and Wife Candy Erker and grandchildren Dennis and Darryl
See more See Less

In Memory Of Gerhard Erker