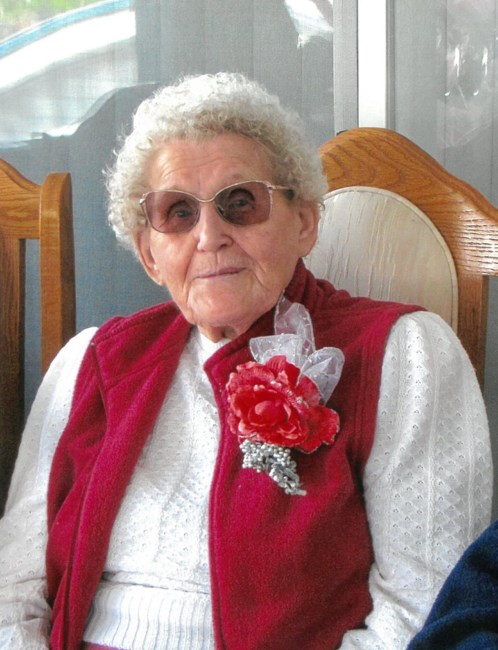 FICOCELLI: Ruby Marie of Kelowna passed away peacefully on July 29th, 2022 at the age of 97 years. Ruby was born April 27th, 1925 in Brewer Saskatchewan to Joseph and Emma Tyce. She was the oldest and last of six, with siblings Edward, Leslie, Harry, Donald and Audrey. She lived in Waldron, Saskatchewan as a youngster and then Melville, Saskatchewan. She moved to North Bend, BC in the summer of 1960 and then to Banff, Alberta in 1963. Ruby and her late husband, Vic, retired to Kelowna in 1974 where she spent many happy years gardening, preserving their garden’s produce, crocheting, sewing, puzzling and reading. Ruby is predeceased by her husband Vincenzo (Vic), son Jacob, a grandson, and also her son-in-law Bill Huesken. She is survived by her three daughters: Kathy Huesken, Dianne (Duane) Sykes, Beverly (Dean) Majewski, son: Kenneth (Sue); nine grandchildren: Tony, Michael, Carolyn, Troy, Barry, Kyla, Jillian, Matt, Ryan and eight great grandchildren: Spencer, Evan, Brooklyn, Brady, Olivia, Natasha, Savanna and Hayden. A Funeral Service will be held at the Chapel of First Memorial Funeral Services, 1211 Sutherland Ave, Kelowna on Friday, August 12, 2022 at 11:00 AM. Entombment will take place at Lakeview Memorial Gardens Cemetery at 2:30 PM. If you are unable to attend the funeral services in person, please join the family online via the Livestream at the time of the service, by going to the link at www.firstmemorialfuneralkelowna.com and click on Ruby’s obituary. In lieu of flowers, memorial donations may be made to the BC Children’s Hospital or to the B.C. Cancer Foundation (Kelowna) in memory of Ruby. Condolences may be sent to the family by visiting the link above. Arrangements entrusted with First Memorial Funeral Services, Kelowna, BC 250-762-2299
See more See Less

In Memory Of Ruby Marie Ficocelli