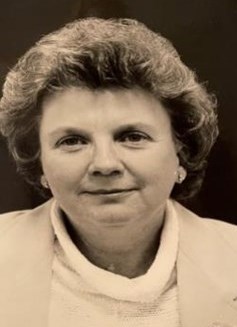 Dr. Helen Swartsfager Ridley of Kennesaw Georgia, originally from Laurel Mississippi born September 19, 1932, passed away peacefully in her sleep in her home in the early morning Thursday, January 7, 2022. Dr. Ridley received her undergraduate degree in Political Science at Southwestern at Memphis, now Rhodes College, where she was president of her AOP Sorority. She then attended Emory University and received her Masters and Ph.D. in Political Science as a Constitutional Scholar. Dr. Ridley’s long academic career centered around Kennesaw State University where she began teaching in 1974 until she retired in 2006. During her long career at KSU, she served as a Professor and Chair of the Department of Political Science and International Affairs. She was also Interim Dean of the College of Humanities and Social Sciences. Working with her colleagues, she developed and built a very successful Model UN program that has been active at KSU for over 30 years. The Model UN program, along with the Mock Trial and the Model Arab Nation programs, received the Board of Regents Teaching Excellence Award. One of Dr. Ridley’s most significant contributions to the University was the leadership she provided in developing unique programs in Conflict Management. Mediation and dispute resolution fit perfectly with her background in Constitutional law, and her vision started with an Undergraduate Certificate Program and led to the establishment of the Conflict Management Center and Masters program in 1996, which won the Board of Regents Program Teaching Excellence Award in 2004. KSU now offers a PhD. in International Conflict Management. Her innovation and strive for excellence greatly expanded the educational opportunities for KSU students, and the awards the students have received from these programs are too many to list here. She served on the State Commission representing the state of Georgia at the United States Commission ceremony at the Bicentennial of the Constitution in Philadelphia in 1987. She stood along side George H. Bush, and her introduction for her speech was given by none other than James Earl Jones. Another commission that is noteworthy is her involvement with the Women and the Constitution in 1988, which she worked closely with the Carter Center, Roselyn Carter, Lady Bird Johnson, Patricia Nixon and Betty Ford. One of the most memorable aspects of her time there was after the final meeting, she sat on a piano bench and sang gospel songs with Coretta Scott King while Ms. King played the piano at Betty Talmadge’s farm in Love Joy, Georgia. Over her many academic years, she touched the lives of thousands of college students, faculty and colleagues in a positive and meaningful way. She supported, mentored and was a role model beyond what can be expressed by mere words. This is exemplified by many cards, letters and recognitions she received both personally and professionally. Along with her professional achievements, she had many personal successes as well. She raised a wonderful family, along with Charlotte, they created a beautiful loving home and her devotion to others and her zest for life were easily seen in her day to day living. She loved to entertain and was an impeccable host. She could be described by friends and family as a great storyteller, a real conversationalist, kind, considerate, generous, and loving in all aspects of her life as well. Helen loved reading and was an avid reader, enjoyed her flowers, traveling, and activities on or around the water. She loved her College Football, and could analyze the game stats, bad calls and wrong plays with the best of them. Quick witted and funny, she was a pleasure to be around. One of her many passions was the conservation and preservation of animals. She donated to many organizations and supported animal rights in numerous ways. She was especially smitten with her two dachshunds Little Lady Love and Mister Pericles. They loved the hours of attention, accolades and treats she bestowed upon them. She was a long – time member of the Allatoona Yacht Club where fun times were spent on their houseboat with colleagues, family and friends. Dr. Ridley was proceeded in death by her first grandson Brandon William Ridley. She is survived by her partner of forty-six years Charlotte L. Stephenson, four sons, Roger Lathem Ridley, Robert Lee Ridley Jr., James Paul Ridley, and Harry William Ridley. Six grandsons, and one granddaughter, Garrison Lathem Ridley, Robert L Ridley III, Tyler Cameron Ridley, Jesen Page Ridley, Jordan Christopher Ridley, Joseph Patrick Ridley, Brent Anderson Ridley, nine great grandchildren and two daughters in law, Tiffany Ridley, and Barbara Rowe whom she held dear. Many cherished colleagues and friends, new and old across generations were very important in her life. Dr. Ridley requested no service. The family has asked if you would like to celebrate her life and love, please do so in her memory to the scholarship fund named in her honor, The Helen Ridley Annual Masters Students Scholarship at Kennesaw State University. Please see below for the direct link to the fund. (Give here) The Helen Ridley Annual Masters Students Scholarship
See more See Less