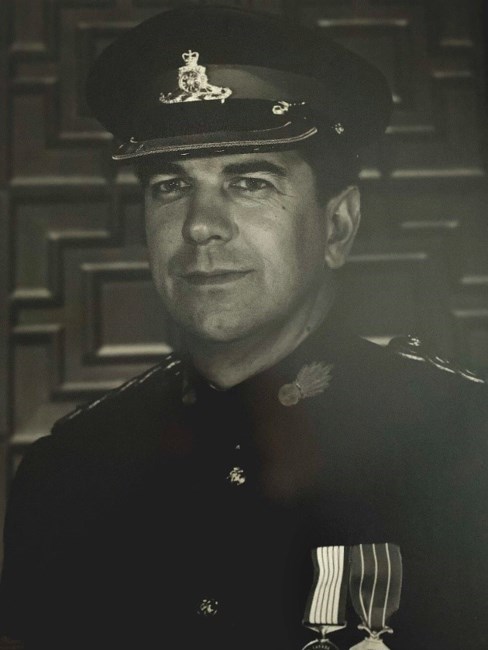 Bruce Harper Findlay January 7, 1932 – January 14, 2023 “A good tale never tires in the telling” He was one of a kind. Bruce grew up on Park Street with his parents Alexander and Mary (nee Kerr), his two brothers Dave (Jeannette) and Ron and his sisters Patricia Huntus (Hoit) and Judy Favreau (Bud). His family shaped the strong values he stayed true to throughout his life. His early years in the militia and the reserves led to a military-like discipline in his life from his ship shape boats to raising his family and running a busy law office. He was famous for his beret, a life-long signal that those military days were never far away. Bruce was a Queen’s University man through and through, trying to talk each of his children and then the grandchildren into following in his footsteps. It was while he was at Osgoode Law School in Toronto that Bruce was introduced to Eileen Haffey. In January, 1959, they were married and in October, 1959, had their first child. He graduated from law school with two children and another on the way. He supported his growing family and his education with a wide array of jobs including railroading, construction, transport truck driving, and the pipeline. In 1962, he and Neen headed to Kenora to build their life. He loved his time in Toronto and always had an attachment to the city life, but also valued the importance of growing up in a small community. The law was a perfect fit for a man with such strong principles and a gift for twisting a tale to convince the jury, his family or anyone else who was listening. He was a force to be reckoned with in and out of the courtroom. He built his law firm from a one-person practice to a multi-lawyer firm with offices in Dryden and Fort Frances. The family has fond memories of the many law students who passed through and became a part of our lives, and the long-term staff especially Shirley Tresoor and Carolyn Johnson. In 1968, Bruce and Neen purchased a camp on Coney Island. The neighbours loved to tell the story of the lovely young couple and their new baby who were going to move in next door. The reality hit when the family arrived that first summer, landing at the dock and swarming up and over the hill like an army. We became firm family friends with the Inman’s from that moment and became part of the extended Coney Island family. The departure of Bruce means that another elder Coney Island statesman is gone. The family lived at Coney for three months each year and, in 2000, Bruce and Neen built their year-round home and retired full time to the island. The property holds many great family memories of beach days and family dinners for three generations. It was at Coney that Bruce learned to make the porridge he was famous for, as all the grandkids and visitors to the camp were served porridge with maple syrup for breakfast. Bruce was a man who loved to spend time messing about with boats, starting with “the pontoon boat” and later the 24’ Grew, the 30’ “Russian Boat” hydrofoil, and the 40’ Nord Ouest, all driven at “Bruce speed”. His years with Power Squadron served him well and he navigated the Nord Ouest to adventures throughout the Lake of the Woods, including annual trips to Warroad and often following LOWISA. Stories about adventures on the Nord Ouest will be told for many years to come. He instilled this love of the lake in all of us. After Neen’s death in 2014, Bruce experienced some health issues and lost his zest for life, until he met Loretta Edlund in 2016. Loretta gave him love and laughter again. The two of them spent hours together laughing, playing bridge, telling stories, and enjoying the peace and nature at Coney. It has been so good for us to see Bruce happy again and we love having Loretta as part of our family. Bruce’s final life transition happened in September, 2022, when he moved to Pinecrest. He understood he could no longer get in and out of a boat the way he used to and that life on the island needed younger legs. He took Pinecrest by storm and made an impact for the short time he was there. Bruce is survived by his children: Jennifer (Tim), Richard (Diane), Allison, Alexandra (Rick), Janet (Joel), Alana, and Trish. And his grandchildren: Marston (Synthia), Ryan (Kristin), Nelson (Veronik), Colin, Taylor (Cory), Colter (Cody), Hannah, Brad (Emily), Erika, Nick, Emme, Ircia, Tyvan, Jakob, Emily, Hayden, Logan, Holly, and Megan. And his great grandchildren: Isaac, and Axton. We offer many thanks to our Coney Island family who helped Bruce to stay on the Island for as long as he did. Thank you to the staff and residents at Pinecrest with special mentions to Nicole Pell, Starr Schott, Brenda Robertson, Michael Limerick, and Dr. Kerry Anderson. And a shout out to Heather Baker at Pharmasave for her gentle, caring, and patient explanations. Thank you also to Lou Swancar for literally keeping him on his feet these past few years, and Kathy Kantola for keeping him trimmed and handsome. In lieu of flowers, donations can be made to the Kenora Public Library, the Seniors Centre in Kenora or Keewatin, or to a charity of your choice. Fond memories and expressions of sympathy may be shared at www.brownfuneralhomekenora.com for the Findlay family.
See more See Less

In Memory Of Bruce Findlay

No scheduled service at this time