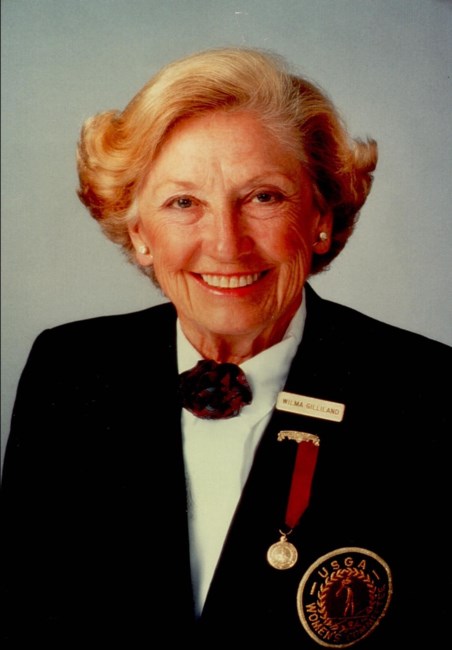 Wilma M. Gilliland, 94, of Kimball, died at the Kimball County Manor on Saturday, December 22, 2018. Funeral services will be held at 10:00 a.m. on Friday, December 28, 2018 at the Cantrell Funeral Home with Pastor Caryl Miller officiating. Burial will be in the Kimball Cemetery. Friends may call at the funeral home on Thursday from 1:00 until 6:00 p.m. Friends may also visit www.cantrellfh.com to view Wilma’s Tribute wall and leave condolences and stories for the family. Memorials may be given in Wilma’s memory to the Kimball Junior Golf Program. The services for Wilma have been entrusted to the Cantrell Funeral Home.  Wilma Mae (Hawkins) Gilliland was born May 16, 1924, in the southern Illinois village of Dix. Raised almost entirely by her grandparents John D. and Amelia Hawkins on their small farm, she attended a one room country school where she quickly worked through the elementary curriculum two years at a time. She attended Salem, Illinois, high school where again she went through the curriculum, especially accounting and bookkeeping, at an accelerated pace, graduating in May of 1941 at the age of 16. Following high school graduation, Wilma took a job as bookkeeper for Ryan Lumber Company in Salem, where she worked through World War II. In the spring of 1944, she met Bruce Gilliland, who was working for the Texas Company, now Texaco, in Southern Illinois, and on October 14, 1944, they were married in Salem. Following her marriage to Bruce, Wilma worked as bookkeeper for W.S. Lemmon Trucking Co. in Salem, and it was in Salem, before they were married, where Bruce taught Wilma how to play golf. On June 6, 1949, her son Stephen was born in Mt. Vernon, Illinois, and in 1950 Wilma, Bruce and Stephen moved to Duncan, Oklahoma, following the petroleum industry. Then in September of 1951, the Gillilands moved once more, again following petroleum, this time to the oil boom town of Kimball, Nebraska. In 1953, after two years with the Flint Rig Company, Bruce founded his own corporation, Plains Well Service, later Plains Construction Company, where Wilma served as bookkeeper from the founding of the company until Bruce closed the company and retired in 1979. Wilma was always the consummate volunteer, involving herself in numerous local and state organizations. While in Illinois, she was deeply involved in Girl Scouts as a trainer for Girl Scout leaders and as a day camp director. When she came to Kimball, Wilma continued her involvement in scouting as a member of the national Girl Scouts of America Regional Committee. From 1957 to 1962, she served as a county representative and Regional Chairman for the American Cancer Society. She was a Den Mother when her son Stephen was in Cub Scouts, and she, along with Bruce, was a four-year Class Parent for Stephen’s Kimball County High School Class of 1967. Wilma loved children, from reading to elementary kids during the Read Across America week at Kimball Elementary, to founding and conducting the Kimball Junior Golf program, introducing golf to hundreds of children, some as young as five years of age. Wilma was an active member of P.E.O. Chapter DT, serving as president and being the driving influence in bringing the P.E.O. State Convention to Kimball in 1989. She served as Area Chairman for the P.E.O. affiliated Cottey College in Nevada, MO. She also received the honor of serving as Guard for the National P.E.O. Convention when it came to Nebraska and was held in Omaha. Wilma was also deeply involved at St. Hilda’ Episcopal Church. When she first arrived in Kimball, she played the organ for church services and served as church treasurer. During the holiday season, Wilma also served as Chairman of the St. Hilda’s Christmas wreath fundraiser. And during the Christmas season she also rang the bell for the Salvation Army at the local supermarket. Wilma will long be remembered for her tireless dedication and contributions to the game of golf, on the local, state, national, and even international level. After that first golf lesson in Salem in 1944, Wilma played competitively until the early 80’s, winning numerous local and five Nebraska State Championships. In the mid-70’s she began shifting her golf focus to organization and administration, serving as President of the Trans-National Golf Associatiion and as a committee member for numerous United States Golf Association national women's tournaments. In 1993, she was elected Chairman of the USGA Women’s Committee, the highest and most prestigious position in U.S. women’s amateur golf. In addition, Wilma served as a rules official for high school golf meets in Nebraska and as an NCAA collegiate official at various tournaments around the country. From 1992 through 1996, Wilma also served as rules official and then Captain for the international U.S. Women’s World Golf Team, positions which took her to tournaments in places such as Venezuela, the Philippines and France. For her many contributions to the game of golf, Wilma was elected to the Nebraska Golf Hall of Fame in 1993.  Wilma will always be remembered for her bright smile, her large and generous heart, her determination to give back, and her love for the game of golf. Survivors include her son Stephen Gilliland of Kimball, NE. She was preceded in death by her husband Bruce, her grandparents, John D. and Amelia Hawkins, and her mother Mamie (Hawkins) Alderson
See more See Less

In Memory Of Wilma Mae Gilliland