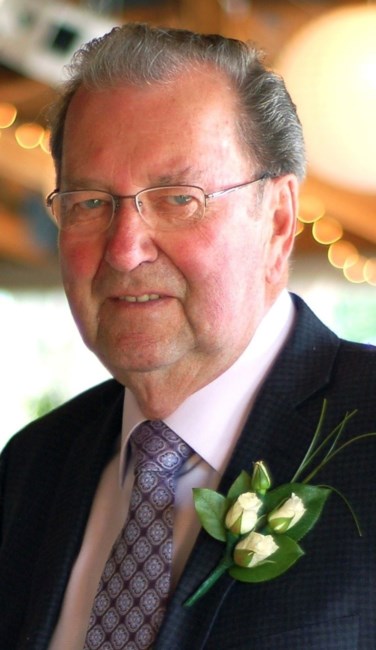 The family of Clifford Wesley Johnson sadly announce his passing on September 15, 2022 at Kipling, Saskatchewan. Cliff was born on the family farm in the Grainview district near Kipling, SK to George & Elizabeth (Parker) Johnson on February 28, 1928, followed by brother Stan and sister “Betty”. Cliff attended Grainview School and finished his high school education at Kipling. He enrolled in Normal School at Moose Jaw, and taught at Neelby and Golden Ridge country schools. He married Ivy Jean Cross of the Golden Ridge district in 1948 at her farm home. Cliff spent his early working years teaching, selling machinery and maintaining roads in the RM of Kingsley until he & Ivy joined her parents, Joe and Beatrice (Sexsmith) Cross, on the family farm. After Joe’s passing, Cliff and Ivy’s son Don became part of the farm operation. He and his wife Linda farmed alongside Cliff and Ivy until 2000. In 2002 Cliff & Ivy retired to their new home in Kipling where they enjoyed community life and many friendships. Over the years, the couple enjoyed dancing, curling, travelling in their motor home, spending winters in Texas and of course, working side by side on the farm. There they raised a family of three children: Don, Mona Lynn and Mary Lou. Cliff suffered a stroke in 2014 and spent several weeks at Wascana Rehab Centre in Regina, SK, cheered by Ivy’s frequent visits. Back at home again, Ivy cared for Cliff, assisted by wonderful home care staff. In 2015 they moved into Willow Height Estates in Kipling where they enjoyed six happy years together. Cliff entered Long Term Care at Kipling Integrated Health Centre in May of 2021 and was joined there by Ivy in May of 2022. The amazing staff helped them live together again until Cliff’s passing. The family wishes to thank everyone there for the loving, compassionate care that made them feel so special and very blessed to live together as a couple right till the end. Cliff and Ivy celebrated their 74th wedding anniversary in July. Cliff will be lovingly remembered by his wife, Ivy; his children, Don Johnson and wife Linda, Mona Lynn Stender and husband Robert, Mary Lou Seier and husband Randy; and his grandchildren and great grandchildren, Nicole and Murray Lyons and children Paige (Ryan), Burke and Kaiden; Nathan and Kristy Johnson and children Jada and Dane; Brandon and Courtney Stender and children Matieo, Dominic and Jack; Dallas Stender; Marshall and Makyla Stender and children Atreyu and Ivy; Courtney and Lee Todd and children Jack and Eva; Preston and Lindsay Seier and daughter Maeve. It has been Cliff and Ivy’s wish to take their “last ride” together. In keeping with their request, there will be no memorial service at this time. Instead, they will someday be laid to rest together in Lansdowne Memorial Gardens near Kipling and a joint celebration of life will take place. Together forever, forever loved. For those wishing to honour Cliff’s memory, a donation to Kipling Integrated Health Centre - Long Term Care, Box 420, Kipling, SK, S0G 2S0 or Lansdowne Memorial Gardens, Box 722, Kipling, SK, S0G 2S0 may be tokens of remembrance.
See more See Less

In Memory Of Clifford Wesley Johnson