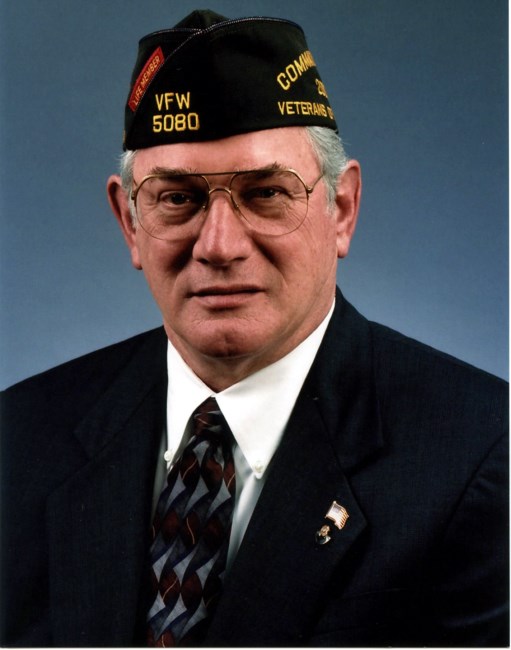 John F. Gwizdak was elected commander-in-chief of the Veterans of Foreign Wars on August 25, 2000, at the 101st VFW National Convention in Milwaukee, Wis. He is the second Georgian to hold this office. Born in Revloc, Pennsylvania and raised in Carrolltown, he enlisted in the U.S. Army in 1958. In 1968, he attended Officer Candidate School and was commissioned a second lieutenant. He retired in 1978 in the rank of captain. His service career included three tours in Germany, including a rotational tour in Berlin, and in Vietnam with Co. E, 4th Bn., 12th Infantry, 199th Light Infantry Brigade. Starting out as a heavy mortar platoon leader, he eventually assumed command of Company E based at Long Binh. The unit operated out of Camp Frenzell-Jones. He held the distinction of having served in all leadership positions from squad leader to company commander of an infantry company. He was inducted into the United States Army Officer Candidate School Hall of Fame. John’s military awards and decorations include the Legion of Merit, Meritorious Service Medal, four awards of the Bronze Star Medal (including one for valor), Purple Heart, Vietnam Cross of Gallantry with palm device, Army Commendation Medal (3), Army of Occupation Medal (Berlin), Vietnam Campaign and Service Medals, Good Conduct Medal (3), Armed Forces Reserve Medal, National Defense Service Medal, Combat Infantryman’s Badge, Parachutist Badge and Drill Sergeants Badge. He joined the VFW in 1977. He established a distinguished record of service at the Post, District and Department levels. In 1988, he attained the status of All-American Department commander, VFW Department of Georgia. Recognized as a leader in veterans affairs, John received numerous appointments to national VFW positions and was elected to the VFW National Council of Administration in 1990, representing the Departments of Georgia and Alabama. In addition to other VFW positions, he served many years as the VFW Department of Georgia adjutant/quartermaster, December 1992 to October 1998 and again from March 2004 through June 2006. John currently serves as the Department of Georgia’s quartermaster. He is owner and president of John F. Gwizdak, Inc., specializing in residential and commercial construction and sales, and is the owner and broker of Builders Realty. He holds an associate of arts degree in human resources administration from the University of the State of New York. Gwizdak is listed in the 2000 Millennium edition of Who’s Who in Executives and Businesses as a veterans advocate. John and his wife, Christine, reside in Raleigh, Ga. John Francis Gwizdak, age 81, of Woodbury, Georgia passed away on Sunday, December 26, 2021. John was born July 7, 1940 in Revloc, Pennsylvania. A gathering of family and friends for John will be held Sunday, January 2, 2022 from 4:00 PM to 6:00 PM at Striffler-Hamby Mortuary, 1010 Mooty Bridge Rd, P.O. Box 399, LaGrange, Georgia 30241. A VFW memorial ceremony will occur Sunday, January 2, 2022 at 6:00 PM, 1010 Mooty Bridge Rd, P.O. Box 399, LaGrange, Georgia 30241. A funeral mass will occur Monday, January 3, 2022 at 11:00 AM at St. Peter's Catholic Church, LaGrange, Georgia. Fond memories and expressions of sympathy may be shared at www.shlagrange.com for the Gwizdak family.
See more See Less

In Memory Of John Francis Gwizdak