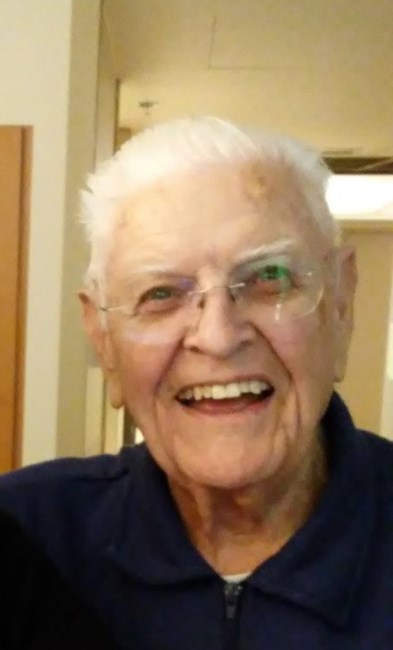 George Eldon Speas of Woodland, age 88, went to be with his Lord and Savior on June 18, 2020 from his home where he resided for 48 years. He was born October 31,1931 in Cleveland, Ohio to Joseph and Doriene (White) Speas Demond. He graduated from Lake Odessa High School in 1949 and then spent the next four years in the United States Navy during the Korean War, where he was stationed in Japan. When George returned from his military duty, he married Nadine Louise Cook on April 30, 1955 at Sebewa Baptist Church. They served together in churches for many years. He pastored in the community for over fifty years, thirty-one at Kilpatrick United Brethren Church in Woodland, Michigan. He also spent time in sales and served as hospice chaplain for Barry County for over ten years. He will be remembered for his contagious laugh and strong faith in the Lord that proved to be an inspiration to his family, friends and community. We are celebrating his entry into heaven, beingwelcomed by Jesus. He had a wonderful life on earth believing, preaching and celebrating the Lord. He is now reaping the rewards of a life well lived. GLORY!!! George was preceded in death, on April 26, 2020, by his wife Nadine (Cook) Speas, his parents, his brother Paul Speas, sister Shirley Faith (Speas) Wilson, brother in law Larry Lepard and brother in law Jerald (Jake) Cook. He will be lovingly remembered by his children, Karen (Mark) Rogers of LakeOdessa, Jeff (Renee) Speas of Lake Odessa, Janneth (James) Hulett of Allendale, Beth (Steve) Foltz of Sunfield: Sisters Eileen (Red) McIntyre of Okemos, Sharon (Mark) Engle of Battle Creek, Valerie (Ernie)Morgan of Battle Creek, Brothers Lonnie Ott and Stephen (Deb) Speas, Sister in law, Marcia (Rod) Lake of Lake Odessa and sisters in law, Nancy (Eash) Cook of Wolverine, and Joanne (Hall) Speas of Fruitland Park, Florida, 14 grandchildren, 14 great grandchildren and many nieces and nephews. There will be a private graveside. At a later date, a large celebration of life for George and Nadine will be open to extended family and friends. Memorial contributions can be sent to Kilpatrick United Brethren Church.
See more See Less

In Memory Of George Eldon Speas