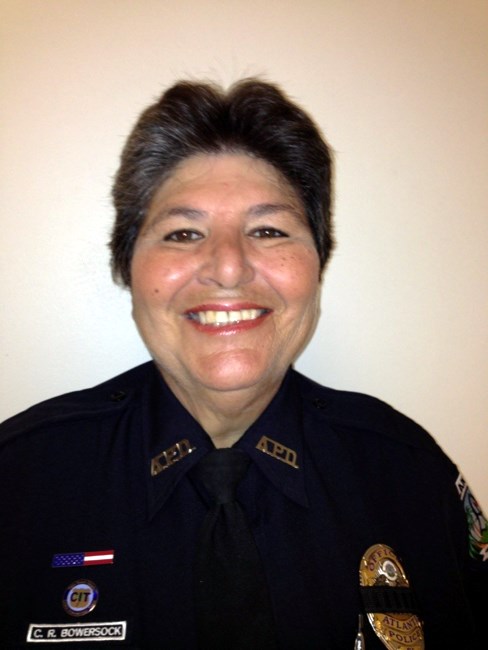 Road Patrol Officer Cecilia Rosa Bowersock "Cecy" (Cecilia Rosa Fernandez) died peacefully in her home on January 19,2019 in Greenacres, FL at the age of 60. Cecy is survived by her husband David Bowersock, daughter Jennifer Bowersock and stepdaughter Amanda Bowersock, stepson David Wilson, and grandchildren Nick Taylor, Madison Taylor, and David Wilson Jr. and great grandchildren Johnny and David Wilson. She is preceded in death by Zenaida Fernandez, Teofilo Fernandez. Cecy was born on August 30th, 1958 in Havana, Cuba to Zenaida and Teofilo Fernandez. She attended high school in Palm Beach County and went on to receive two associates degrees in criminal justice and nursing. At age 21, she attended the police academy and shortly after graduation was hired by West Palm Police Department, where she worked in vice, detective, crimes against children, detective sergeant and ended her career of 30 years of service as road patrol sergeant. After retiring from the city of west palm, she worked for the past 7 years as a road patrol police officer for the City of Atlantis police department. She married David Bowersock, a Mangonia Park police Sergeant on December 20th, 1986. Although, David had two children from a previous marriage she welcomed his children, David Jr. and Amanda into her home as her own. In 1992 Cecy and Dave adopted a newborn baby Jennifer. Her children remember her as a loving, caring, and understanding mother who encouraged them to pursue their goals. Cecy was accomplished at pocket billiards and fishing, and an accomplished bowler. She had a strong and competitive nature and was passionate about making a difference. A funeral is scheduled for a 12:00-2:00 greeting, and the service will start at 2:00, followed a reception where guests are encouraged to share stories of encounters with Cecilia at Dorsey Earl Smith funeral home at Memory gardens 3041 Kirk Rd. Lake Worth, FL 33461. The service will be live streamed on Facebook at APA of Palm Beach County's Page. All are welcome to attend and celebrate Cecilia's life. The family would like to thank the JFK hospital staff and Hopespring Hospice for their care and dedication.
See more See Less