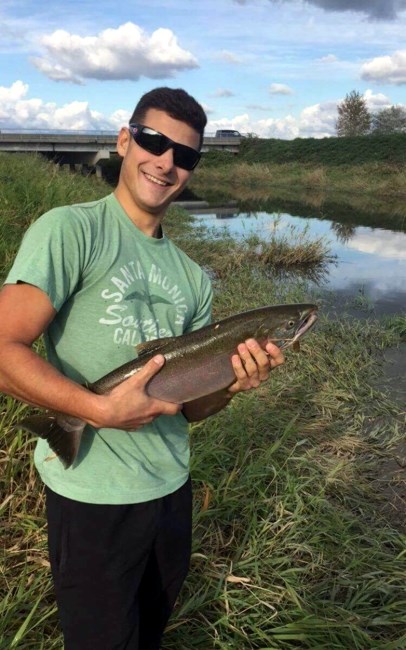 Tragically on Wednesday June 20th, 2018 Andrew Collin Futerko, 19, of Surrey, British Columbia, was hit and killed when a vehicle stuck him, while he was riding his motorcycle, close to his home. Andrew was born on Sunday October 11, 1998 in Richmond British Columbia, the son of Natalie White and Shawn Futerko and the younger, but big, brother of Marley Futerko. He graduated in 2016 from Lord Tweedsmuir, Surrey, B.C. where he is remembered by many teachers and friends for his sense of humor and larger than life personality, heart and smile. He was a valued employee at Flynn Canada, Surrey, B.C., where he worked alongside his father, Shawn. Andrew was two days away from graduating from his apprentice training as a Glazer. Andrew played for the Lord Tweedsmuir Rugby team where he travelled to Ontario, Wales, England and Scotland. Andrew enjoyed snowboarding, gaming and being at home. He Loved Jim Carrey, was a comedian and practical joker and Life of the party, leaving people laughing wherever he went. He was a proud Canadian and he Loved Canada Day. Andrew was greeted in heaven by his namesakes: Uncle Drew (William Andrew White) and cousin Collin LaRoche. Andrew will always be lovingly remembered and heart wrenchingly missed by his parents Natalie and Shawn (Irene), his big sister Marley; Paternal Grandparents Darlene and Ben Futerko - Garrett (Michelle) Jordan; Tammy (Wendell) Cody; Maternal Grandmother Diane Mageau-White (Richard) and Maternal Grandfather Bill White – Drew (predeceased) Amanda, Brianna; Gordon (Christina) Stephanie, Tyler; Barbara Peters (Tom) Jason, Brittany also many great aunts, uncles, cousins and friends from everywhere but especially, British Columbia, Saskatchewan, Ontario, Quebec and Scotland. Andrew will be greatly missed by everyone that knew him and who his big heart touched. He was a handsome, funny , smart, young man who lived his life being his own person, he made an impression on everyone he met. Until we meet again, Andrew will always be loved missed and his memory will be kept alive by all those who love him. The Andrew Futerko Memorial Scholarship Fund has been established to help families of the Lord Tweedsmuir Rugby team. A laugh, a grin, a joke or two, that's the way we'll remember you.
See more See Less

In Memory Of Andrew Collin FUTERKO