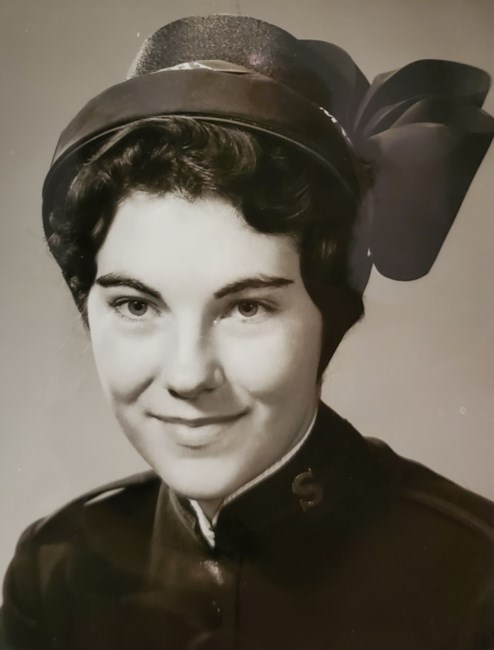 March 5, 1943 – July 20, 2020 (see donation information below) It is with a heart of sadness that I announce the Promotion to Glory of Major Dolores Fame (nee Gass), my beautiful wife and partner for nearly 54 years. She passed away peacefully in the early morning on Monday, July 20, 2020 from Chartwell Crescent Gardens Nursing Home, Surrey, BC. Dolores was born in Saskatoon, Saskatchewan on March 5, 1943. At the age of five, the family moved to Kelowna where she attended school and graduated. In 1962, after working at an Insurance Company, Dolores attended The Salvation Army Training College/Seminary in Toronto. She served for two years at various churches in Ontario as a single Officer/Pastor. Dolores then took another significant step to marry Samuel Fame, a newly Ordained Lieutenant. They were married in Kelowna, BC on July 25, 1966. Their ministries included pastoral charges at various Churches across Canada, 5 years in Public Relations and 15 years at The Salvation Army Vancouver Harbour Light. Dolores' ministry at Harbour Light continued until she and her husband retired on July 1, 2006 after completing 43 years of Service. Major Dolores, affectionately known as “Dodie” was well loved for her beautiful caring heart and gentle spirit. She is lovingly remembered and sadly missed by her husband, Samuel; Daughter, Brenda; two sons, Sam Jr. (Tonya) and Steve; three grandchildren, Sam Jr's daughters, Keely & Genevieve; grandson, Jacob, son of their daughter Karen (who predeceased her Mom on July 26, 2009). Dodie will also be deeply missed by her sister, Margaret Gingera (Kelowna); special sisters-in-law, nieces, nephews and host of friends. Due to Covid-19, a Private Family Graveside Service with be held on the Fame's 54th Wedding Anniversary to celebrate Dolores' life and their relationship. A Public Memorial Service will be held at a future date. In lieu of flowers, donations can be made to: THE SALVATION ARMY VANCOUVER HARBOUR LIGHT 119 EAST CORDOVA STREET VANCOUVER, BC V6A 1K8
See more See Less

In Memory Of Dolores Fame