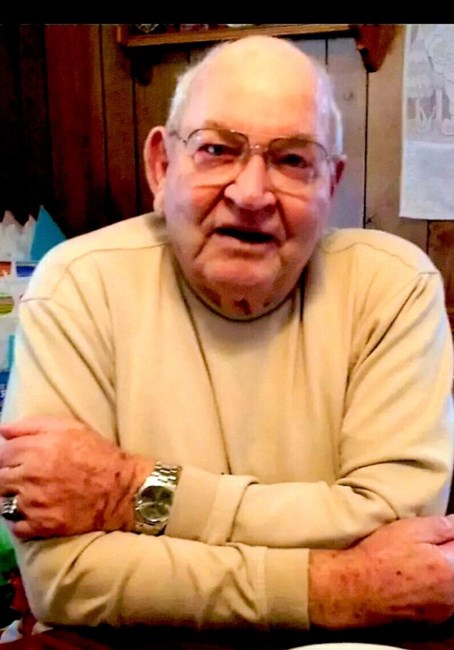 Allen J Ruthruff, "Al" or "Big Al" age 96, of Lansing, Michigan passed away of natural causes on Tuesday, September 27, 2022. Allen was born December 2, 1925, in Belding, Michigan to Iva (Kimball) and Kenneth Ruthruff. Allen married the love of his life, Vivian May Miller, in Junction City, Kansas on September 15, 1945. He graduated in 1944 from Edmore High School. After graduation Allen joined the Army in 1945 as a Calvery/Trooper at Fort Riley. He was honorably discharged in 1946. During his service in the Army Allen was awarded the American Theater Service Ribbon, Good Conduct medal, and the World War II medal. After his discharge from the Army Allen proceeded to find a career at Oldsmobile/GM skilled trades, pipefitter for 34 years. He also would find many side jobs to help support his family. One of Allen's most special accomplishments was raising his seven daughters! Allen spent many years of volunteering for Bingo affiliations for charity. He received many awards from St. Jude Children's Hospital, including the Man of the Year award in 1980 for all the time and effort he had pledged to the Lansing Chapter. He was sent by ALSAC to meet Danny Thomas in Memphis and was able to tour St. Jude Hospital. Allen was also a member of the Oldsmobile Outdoor Club. Allen was an avid MSU fan (Go Green!), and he loved watching sports. Allen coached little league flag football, which he enjoyed for many seasons. He loved traveling and camping with his daughters, friends, and relatives. He managed to visit all 50 states! Allen was also an avid reader and loved woodworking. Allen spent several years enjoying bowling, softball, and being on golf leagues. He loved fishing, archery, hunting, snowmobiling, card parties, and CB radio with the call sign "cannonball". Allen absolutely loved the outdoors and anything to do with it. Allen was a very generous man volunteering any of his free time to help his family, friends, and community when needed. He was trustworthy, very social, compassionate, loyal, charming, funny, honest, loveable, and dependable. Allen is survived by his loving wife of 77 years, Vivian; his seven daughters, Connie (Lanny) Weems, Karen Gossett, Vicki (Randon) Parker, Carol Lorenz, Teri Hoeflinger, LuAnn (John) Rausch, and Kenda (Jim) Schreiber; his 13 grandsons; 3 granddaughters; 16 great grandchildren; 7 great-great grandchildren; his beloved cat of 15 years, Smokey; special lifelong friends, Ray and Marge Gardner; and Yamiko Winchester, a dear neighbor and friend. Allen is preceded in death by his father, Kenneth Ruthruff; his mother, Iva Ruthruff; and his brothers, Raymond and Keith. A visitation for Allen will be held Monday, October 3, 2022 from 11:00 AM to 12:00 PM at Gorsline Runciman Tiffany Chapel, 3232 West Saginaw Street, Lansing, MI 48917, followed by a funeral service at 12:00 PM, officiant Chris McNeely. The family would like to extend a heartfelt thank you to Elara Caring Hospice Facility for their exemplary care of their dear father. Also for the devotion shown for their mother during this difficult time. A special thank you to Jennifer, Julie and their entire team. "They are true angels!"
See more See Less

In Memory Of Allen J Ruthruff