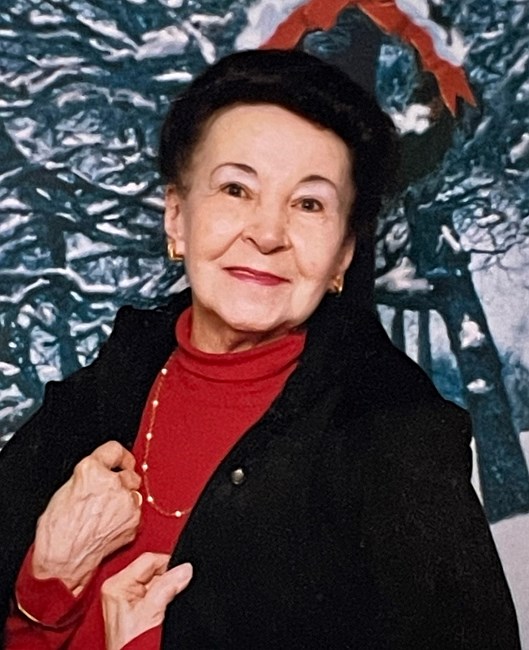 Lucille Bernadine McNamara, age 91, beloved mother, grandmother, and great-grandmother, passed away peacefully in the presence of her family on Wednesday evening, September 28, 2022 at the Mother Teresa House of Lansing, Michigan. Lucille was born on December 27, 1930 in Bay City, MI to Joseph and Mable (White) Martin. The eleventh of twelve children, she was raised by her father and an older sister, having lost her mother at age four. As a young woman, Lucille met a charming man of Irish descent, Edward H. McNamara of Lansing, while working at a restaurant near his produce stand in Bay City. After Lucille’s graduation from Bay City Central High School in June 1948, she married Edward, the love of her life, at St. Mary Cathedral in Lansing on October 9, 1948. Lucille and Edward settled and started a family in Lansing and over the course of nine years, she gave birth to six children. Following the unexpected death of Edward on St. Patrick’s Day of 1973, Lucille finished raising her children on her own. In the 1980s-90s, Lou, as she was fondly referred to by neighbors and friends, worked for Maurer’s Textile Rentals for twenty-five years, and held a position as supervisor while there. She spent her later life in the same home on Vine St. in Lansing that she and Ed had purchased in 1964. There she hosted boisterous Halloween and St. Patrick’s Day gatherings, provided care and endless love to her grand and great-grandchildren, all of whom affectionately referred to her as Nama, and attended Mass regularly at Church of the Resurrection, where she’d been a member since 1964. Nama had a natural talent for the organ. She could often be found playing in her home, the songs she played from memory that sang through the electric organ. She was a woman of deep faith, and spent much of her time saying rosaries for a multitude of people and causes, and talking with God. The world was made a better place because of her pure intentions and convictions in love and goodness. Lucille was preceded in death by parents, Joseph and Mable; husband, Edward; son, Michael “Mick”; siblings, Agnes Dion, Rose Krager, Mable Frasik, Roberta Behmlander, and Edward, Joseph, Frank, Dayton, Bernard and Delorwn Martin; and special friend of many years, Gerald Kincaid. She is survived by her children, Linda (Mario) Pascotto, Thomas (Terri) McNamara, Sherry McNamara (Terry Maag), Carrie (Dave) Muylle, Mark McNamara; daughter-in-law, Annette McNamara; brother, Orwin Martin; nineteen grandchildren, twenty-six great-grandchildren, one great-great grandchild, and another one on the way. Lucille’s family would like to thank the staff and volunteers of the Mother Teresa House in Lansing, where she spent the last nine months of her life. The kindness, dignity, and gentleness they treated Lucille with in her last months, weeks, and days was deeply moving for her family and they will be forever grateful. Thank you also to the staff of McLaren Hospice for their care. A visitation will be held at Gorsline-Runciman Tiffany Chapel, 3232 W. Saginaw St. in Lansing on Thursday, October 6, 2022 from 2-4 and 6-8 pm with the Rosary prayed at 7:30. Mass of Christian Burial be celebrated at Church of the Resurrection at 1505 E. Michigan Ave at 11:00 am on Friday with visitation from 10:00 am until the time of Mass. In lieu of the gift of flowers, the family asks that donations be made to the Mother Teresa House in Lansing (P.O. Box 13004 - Lansing, MI 48901).
See more See Less

In Memory Of Lucille Bernadine McNamara