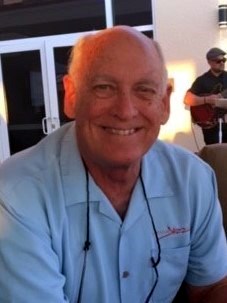 Larry Paul Gerwig was born in Springfield, Ohio on March 12, 1945. He was predeceased by his parents, Lawrence and Glenna and his sister, Melanie. He moved with his family to the Clearwater area in 1963 upon his graduation from high school. He graduated from Pinellas Technical College, Clearwater, studying construction and architectural design. In 1965, he was drafted into the US Army. He served 2 years. He is survived by his wife, Linda of 32 years, his two sons, Paul (Joanna) of Ayers, MA, David (Kristina) of Clearwater and two stepsons, Mark Streicher (Stacy) of Tampa and Michael Streicher (Lori) of Japan. Eleven grandchildren, Andy, Ethan, Spencer, Katie, Emma, Taylor, Carson, Riley, Sydney, Zachary and Jack. Larry loved to travel. Being stationed in France while in the army, his interests in foreign ports were piqued. Larry met his first wife, Mary, from England, on his travels. She was vacationing in Spain. Upon his discharge from the army, Mary came to America with him. They married, settled in Clearwater and started their family. They had two sons, Paul and David. Linda and Larry’s journey began a little later in life, blending two families together with Linda’s two sons, Mark and Michael. Larry continued his love for traveling with Linda traveling abroad to many ports of call. Larry was always ready for a new adventure. His 50th birthday began a decade of sailing with the purchase of a 32 ft. Hunter Sailboat, named Sea Venture. He taught himself to sail and enjoyed many sun set cruises, day sails and races to Key West. Larry believed in giving back to the community. One of his passions was jazz music. He was a member of the Clearwater Jazz Foundation Board for 25 years and past president. He always looked forward to October’s in Coachman Park in Clearwater listening to his beloved jazz music. As Larry became semi- retired, he took up painting, taking lessons at the Beach Art Center, Indian Rocks Beach. His new passion became painting. He was an accomplished artist in watercolor and oil painting. He won multiple ribbons in juried shows at the art center. His travels gave him many subjects to paint. He joined the Beach Art Center board, volunteering and assisting in fund raising events. Larry loved the game of Pickle Ball. His favorite score was “7-Up” and could often be heard saying, “Come back with a prayer” if his side was behind. His most recent adventure was purchasing a Green Egg. He enjoyed exploring cook books for recipes and discovering new spices as he perfected his cooking talents. Larry loved parties, especially Friday parties! Any occasion though was a reason for a party, a reason to celebrate! A dirty martini with extra olives was the drink of choice and a few gin and tonics along the way! He loved people and being surrounded by family, grandkids and friends. He touched many lives along his journey. His heart was big and full of love to share with all those that entered his life. Larry made so many wonderful and lasting friendships along his journey with his professional career and his community involvement. He loved life and lived to the fullest, always learning and encountering new adventures. “Work hard, Play hard.” was his motto! And of course, “Hard Work pays off” was often heard by our children as they were growing up. He set a fine example as a parent, a partner and a friend. He lived large and created a world in which he could. He would be so touched by the outpouring of love from so many. He will be greatly missed by Linda, Paul, David, Mark, Michael and all the grandkids and dear friends. Family has requested that donations be made in lieu of Flowers to the Beach Art Center and/or Clearwater Jazz Foundation.
See more See Less

In Memory Of Larry P. Gerwig