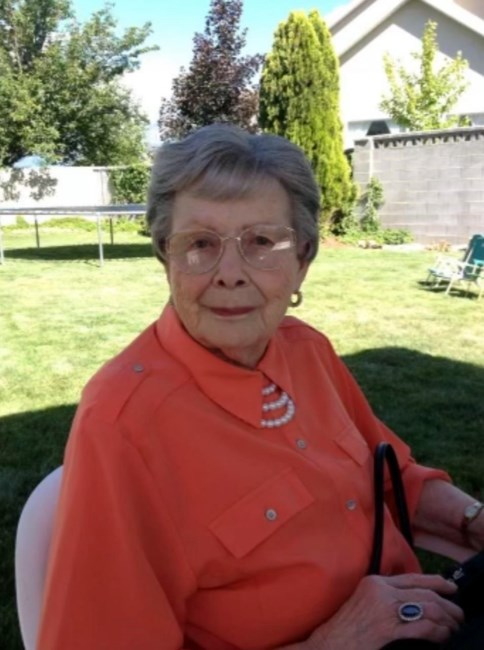 Our amazing mother, grandmother, and disciple of Jesus Christ passed away on September 19, 2022 in South Jordan, Utah. Harriet was born in La Grande, Oregon on January 5, 1923 to Wilford and Ruth Johnson. She was an active member of The Church of Jesus Christ of Latter-day Saints throughout her life and served three full-time missions with her husband (the Netherlands, Denver Temple, and Salt Lake City Family History). She married the love of her life, Clyde Hart (deceased), in the Mesa Arizona Temple on April 16, 1943. Harriet supported Clyde throughout his military career (including WWII as a B-17 pilot and Vietnam) and raising a family in many locations (Idaho, California, Germany, Texas, Kansas, Illinois, Louisiana, Arizona, Utah, and Nevada). She is survived by Sharon Hart Moxley (Vince Moxley--deceased), Don and Sherry Hart, and Bob and Dana Hart. In addition to her husband, she was preceded in death by her daughter, Linda Hart Jensen (Larry Jensen) and her son, David Hart. Harriet is survived by one sister, Mary Chandler. She leaves the legacy of a life well lived to her beloved descendants (21 grandchildren, 66 great-grandchildren, and three great-great-grandchildren). Funeral will be conducted at the Arroyo Grande Ward, 2091 Wigwam Parkway, Henderson, Nevada of The Church of Jesus Christ of Latter-day Saints on September 30th at 11:00 a.m. Viewing at 10:00 a.m.
See more See Less

In Memory Of Harriet Marie Hart