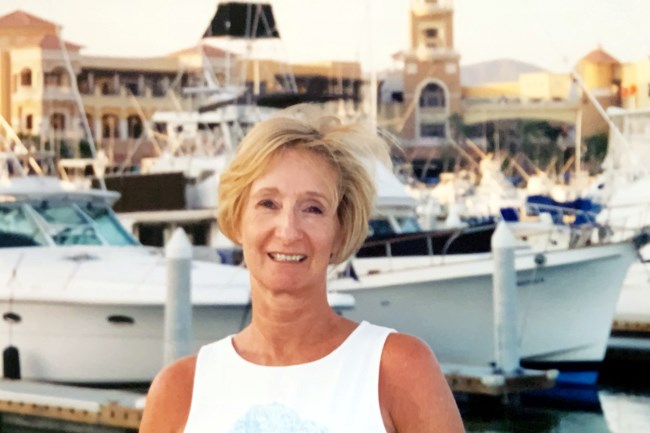 Michael (“Mickey”) Howard passed away on Wednesday, May 4, 2022 at the age of 77 in her home in Henderson, Nevada with her husband (Bob) and her two daughters (Karen and Katherine) by her side. Michael loved life and all its pleasures and for those who loved her, the world seems a little less bright. Born on June 8, 1944 in Seco, Kentucky to Ed and Irene McClelland, Michael was named after her father’s World War II buddy, and nicknamed by her grandmother after Mickey Mantle. Her unique name was a source of pride to Mickey and those who knew her and a source of regular confusion to pretty much everyone else. Michael started dating her husband, Bob during their senior year of high school. After high school, Michael went off to college at Eastern Kentucky University, where she graduated in three years so she could move to Colorado to be near Bob during his last year at the Air Force Academy. They married on June 26, 1966 and at the time of her passing, they had been married for more than 55 years. Over those years, they had two daughters, lived around the country and in Japan, got advanced degrees (Mickey got a masters from Wright State University), stayed at almost every hotel on the strip, and definitely saw every 1960s singing group that performed in Las Vegas. Michael was one of those lucky people who loved her career. She inspired countless students and her daughters with her love of British Literature, including during the last 22 years of her teaching career at Valley View High School in Moreno Valley, California. After her retirement in 2008, Mickey and Bob moved to Henderson, and nobody took to retirement like Michael. She was a board member of the Silver Foxes and the Sun City Anthem Women’s Club, and a member of the Chinese American Heritage Club, Italian American Heritage Club, a line dancing group and at least three book clubs. She also had to be the most consistent participant at the Sun City Anthem exercise classes. The retirement hits kept coming when her kids finally got it together and gave her some grandkids (Sebastian and Sydney, son and daughter of Katherine Howard and Todd White, and Sam, son of Karen Howard and Dale Gold). With her grandkids, she loved visiting the beach and amusement parks and letting them play Candy Crush when their parents weren’t looking. In 2021, Michael was diagnosed with ovarian cancer. Even though the odds were against her, she wanted every treatment and did everything without complaint. Her family is grateful to the many caregivers who have helped Michael during the past year and a half. Early detection is the key for ovarian cancer so in lieu of flowers, please consider donating to the Ovarian Cancer Institute (https://ovariancancerinstitute.org/donations/). A funeral service for Michael will be held on Friday, May 13, 2022 at 1:00 p.m. at Palm Eastern Mortuary, 7600 S. Eastern Avenue, Las Vegas, NV 89123.
See more See Less

In Memory Of Michael McClelland Howard