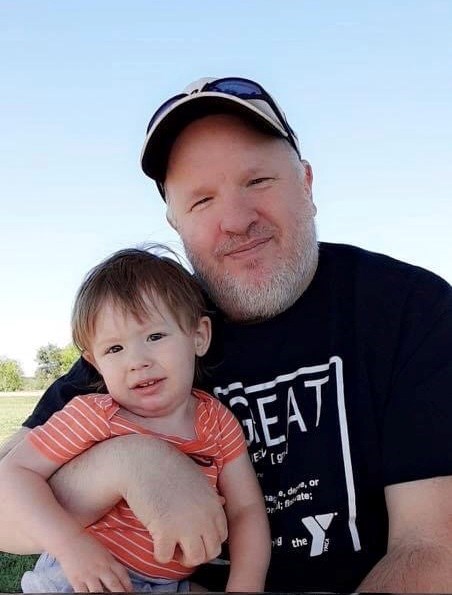 Hershel King, 47, passed away at Seton Medical Center in Austin, Texas on July 3rd, 2021 following a hard-fought battle with Covid and its effects. He was born on May 23rd,1974 at Brackenridge Hospital in Austin, Texas to Phyllis and Randy King. Hershel grew up in the Cedar Park area and lived there most of his life. He graduated from Leander High School, Class of 1993. He attended nursing school at Central Texas College and graduated with his LVN in 2011. He was also pursuing his RN and enrolled in an LVN to RN Bridge Program. Hershel proudly served in the U.S. Marine Corps and retired in 2001. At the time of his death, Hershel lived in Burnet, Texas and was employed by Seton Highland Lakes where he worked as a nurse. Throughout his life, he demonstrated a passion for family and helping others. Hershel was a devoted grandfather to his 2 year old grandson, Wayde Wilson King. Family always came first in Hershel’s life and he loved to spend time with them. Hershel, his brother Levi, and his uncle Ronnie, loved golfing together. Hershel golfed over 120 Texas golf courses in his life. Family poker nights at his brother, Levi’s house, were the highlight of the week. Hershel could always be counted on to bring the drinks, his memorable smile and witty sense of humor. Hershel was a movie and television buff, and loved Star Wars. He was also an avid hunter and enjoyed his time at the King Family Ranch in Rock Springs, Texas. He is preceded in death by his maternal grandparents, Maxine Miller and Frank Sims; his maternal step-grandfather, Calvin Miller his paternal grandparents, Dorothy and Clive King; his maternal aunt, Nelda Schilhab; his maternal uncle, Reito Sims; his paternal uncle, Larry King; his maternal uncle, Fred Barr. Hershel is survived by his mother, Phyllis Sims King, of Burnet, Texas; his father, Randy King and step-mother Becky King, of Port Aransas, Texas; his three younger brothers, Levi, Joshua and Russell. He is also survived by his son, Tristan King and his daughters, Ashlyn King and adopted daughter Caitlyn Nuncio King; his grandson, Wayde King; his uncles, Ronnie Sims, Willy King, Ricky King Gary King and their spouses; his aunt, Brenda Barr; and numerous nieces, nephews, cousins and dear friends. A celebration of his life will be held at 2:00 P.M. on Sunday, July 11th at Weed-Corley-Fish Funeral Home at 1200 S. Bagdad Rd. in Leander, Texas. Words of comfort may be shared with the family at www.wcfish.com.
See more See Less

In Memory Of Hershel Heath King