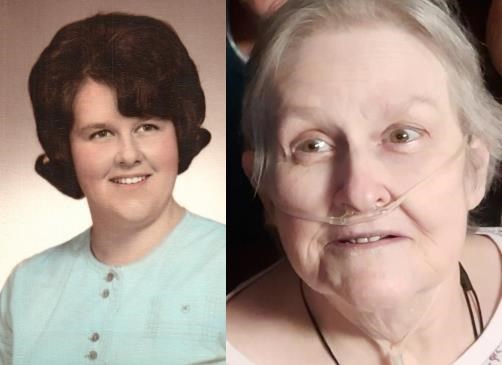 Constance L. Binette, 76, of Lewiston, Maine, passed away peacefully Wednesday, January 18th, 2023 at the Marshwood Center after years of an increasing number of serious ailments and all the complications that go with them. However, she toughed it out for as long as she could. She fought the good fight… and won, as her prize was a ticket to spend eternity in heaven with the Lord Jesus! Connie was born on December 20th, 1946 to Albert and Lucia Saucier Binette. She attended Holy Family School and Lewiston High School. During her employment years, Connie enjoyed helping the ailing folks as a Med-Tech at a couple of local nursing homes, including the one she passed away in. Once her disabilities forced her into early retirement, Connie ensconced herself, crafting, books, Bruins, Red Sox, and more books! She told me she could smell a yard sale coming. Connie is leaving behind her baby brother, Don of Durham, Maine, and many, many cousins She is predeceased by her parents, her 37 aunts and uncles, and again, many, many cousins. A heartfelt thank you to the many staff members of Marshwood Center for the assistance she received as well as from Androscoggin Home Health and Hospice for their added support. Connie’s needs were many and the care that she received was nothing less than loving. If one is prone to sending flowers, please consider instead, a donation to the Good Shepherd Food Bank in Auburn, Maine. Goodbye my sweet sister! A visitation will be held from 9-11AM on February 4th at The Fortin Group, Lewiston, 70 Horton St. With a burial to follow at St. Peters Cemetery at 1130AM.
See more See Less

In Memory Of Constance L. Binette