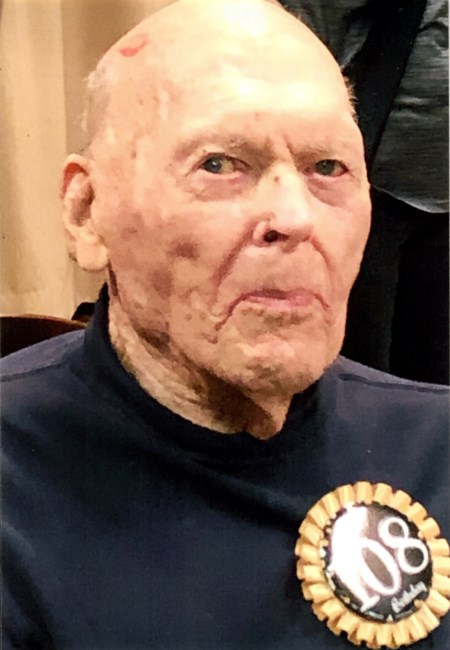 Charles Kayhart celebrated his 109th birthday on October 14th before passing away on Monday, October 26, 2020. Born Charles Clifford Kayhart in Bloomingdale, New Jersey in 1911, he was the son of Charles Kayhart and Viola Decker Kayhart. He is the widow of Ann Kayhart, who passed away in November 2006. They were married 70 years. Mr. Kayhart has 3 children: Clifford Kayhart (deceased), Susan Mallini of Lexington, SC and Pam Kayhart Fyffe of Atlanta, GA; 3 grandchildren: Justin Fyffe of Hollywood, CA, Jennifer Lauer of Chapin, SC, Kristen Hazen of Atlanta, GA and 5 great grandchildren. Mr. Kayhart fell in love with radio and baseball at a young age. In 1920, at the age of nine, he built his first radio. A varsity baseball player in high school, his team won the Blass B championship of the state of New Jersey. At 17, he became a runner on Wall Street; then worked for New York Telephone Company where he parlayed his love of engineering into several positions up the ladder until he hit as far as he could go without a college education. Already building a Heathkit airplane in his family’s basement, Cliff decided to choose Tri State University in Indiana, where he could study aeronautical engineering. He graduated with a degree in that subject in 1934. After graduation, Cliff got a job with RCA in New Jersey and became a quality control manager. From there Mr. Kayhart was made service supervisor of Philco Radios, then with Bendix Aviation in the aircraft instrument division in New Jersey. From there Mr. Kayhart went into the ARMY Signal Corp and went to Harvard MIT to study radar. Then Mr. Kayhart was assigned to the Air Corp stationed at Robbins Field, Georgia and from there he was assigned to go abroad to Hawaii and join the 31 16th Signal Service Battalion with headquarters at Fort Shafter, Hawaii. From there Mr. Kayhart went to Iwo Jima where he was Commanding Officer of installing the administrative radio station for Iwo Jima. After spending 6 months in Iwo Jima, he was ordered back to headquarters in Fort Shafter. While waiting for his air transport back he witnessed the Enola Gay flying overhead to Hiroshima to drop the atomic bomb. He would become Commanding Officer of the inter-island radio station on Maunakapu. In 1946 Mr. Kayhart left the military as a Captain and returned to civilian life. He then went on to design an instrument for the Federal Government and from there he joined Magnavox in 1947 as their first field engineer. As this time, Magnavox was going to manufacture televisions. After serving many positions, the first service training director, he was eventually assigned to a new department in Greeneville, Tennessee called the Customer Acceptance Department. Mr. Kayhart traveled to Japan in 1963 in search of Japanese television. Mr. Kayhart retired from Magnavox in 1976. He was a member of Dutch Fork Amateur Radio Group and was the oldest actual ham radio operator in the world, the oldest surviving Iwo Jima veteran and 8th oldest living US male. He was also the oldest man on the SC Honor Flight trip to D.C. Mr. Kayhart said, “Coming to Greeneville was one of the finest things I ever did. I enjoyed working with the people in Greeneville. And I decided that this would be my home for the balance of my life.” He moved to Columbia, SC at the age of 103. A private family service will be held at a later date.
See more See Less

In Memory Of Charles Kayhart