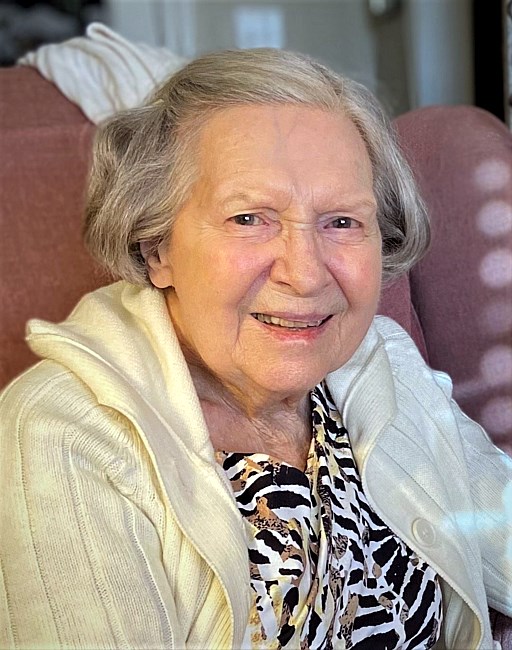 Mary Frances “Fran” Spell Griffith passed away peacefully in hospice in Chattanooga, TN on January 14, 2023 after a protracted battle with vascular dementia. She was a long-time resident of Lexington, SC. Fran was born at home in Grover, SC, the only daughter of the late D. Smith and Thelma W. Spell of Charleston, SC. She was predeceased by her husband of 66 years, Earl W. Griffith, Sr. and three brothers, Will S., David S., and Delano R. “Pete”. She is survived by her son, Earl, Jr. (Joyce Wells) of Soddy Daisy, TN; granddaughters, Claire Stockman (James), Erica Gannon (Mike Martin) and Phala Rasmussen (Matthew); great- grandchildren, Genevieve and Siler Stockman, Fletcher Martin and Harper, Davis and Anders Rasmussen. The family moved to Charleston during WWII. Fran attended the College of Charleston. She met husband, Earl, on a blind double date with her best friend, Delores Herndon. After marrying, she was left at home in Charleston with a new car (which she couldn’t drive) while Earl enjoyed a world cruise with a stop in Korea at the invitation of the US Navy. Afterwards, the couple moved to Oxford, OH, where Fran was Assistant to the Athletic Director, John Brickels and Head Football Coach, Ara Parseghian at Miami University and Earl served as a NROTC instructor. Moving to Columbia, SC so Earl could earn his degree from USC, Fran worked for the Federal Land Bank system until retiring to become a homemaker, Cub Scout Den Mother to Earl, Jr. and casual artist. The family leased a lot at Turner’s Landing on Lake Murray in Lexington in the early 60s with three other families – the “Crazy 8” as they were known. They shared fun family summer vacations together for many years. The family moved permanently to Turner’s Landing in 1971, prior to building a permanent home nearby. Fran, with her friend Marie Schuster, opened Granby Interiors as Interior Decorators. She meticulously designed and installed the aesthetics of her new home: painting with paint colors she blended and hanging wallpaper. After a short stint in NC, while Earl worked for the Governor, they returned to Lexington and Fran began her second career as a church secretary at Westminster Presbyterian Church. She lived on the lake until moving with family to Chattanooga in 2017. Fran traveled extensively with Earl and her brother, David, including trips to the Southwest, California, Mexico and Canada with International Lion’s Club conventions in England and Hawaii. They were scheduled to travel on 9/11 and just managed not to board the plane as the disaster started. Fran loved art and music and attended the Spoleto Arts Festival in Charleston for many years. Her collection of Classical CD’s was extensive. She was active in her church – Saxe Gotha Presbyterian. Burial will be at the Fort Jackson National Cemetery on January 20, 2023 at 11:00 AM. As she requested, a gathering of friends and family will be held in lieu of a formal funeral, tentatively scheduled for Travinia Italian Kitchen on US-378 in Lexington from 1:00 to 3:00 PM after the burial. Please come join us! In lieu of flowers, the family requests donations to the Non-Designated Memorials Fund at Trinity United Methodist Church at 273 Meeting St., Charleston, SC 29401 (843-722-8449) or www.TrinityUMCCharleston.com Fond memories and expressions of sympathy may be shared at www.caughmanlexington.com for the Griffith family.
See more See Less

Gathering of friends and family following the burial