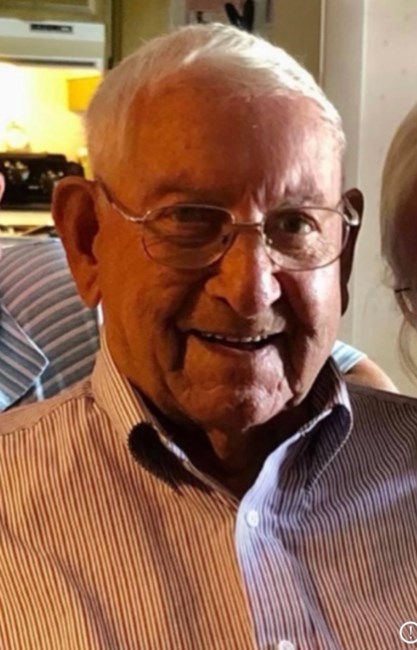 Donald V. “Don” Clevenger, 97, of Liberty, died Wednesday, July 6, 2022 at Reid Health in Richmond. Don was born to Leroy and Vivian Lyons Clevenger on January 16, 1925 in Brownsville. He enlisted in The United States Navy in August 1942 during World War II. Don was stationed on the east coast as an Aviation Metalsmith, where he was tasked with patrolling the waters from New Brunswick, Maine to Bermuda, and Guantanamo Bay. He was awarded various medals including: World War II Victory Medal, American Theatre Medal, and Good Conduct Medal. After returning home from the war, Don was employed at Miles & Richmond as a contractor for over forty-years. In addition to his day job, for upwards of 20 years he and his wife Myrt owned the Stoney’s Corner Greenhouse where they seeded and raised their own plants. Don was well known in Union County as the last surviving World War II veteran, the recipient of an Honor Quilt presented by the Ladies Auxiliary, the caretaker for the American Legion, the Grand Marshall for 2 Liberty parades, and the recipient of the 2015 Honor Flight to our nation's capital. However, not many people are aware that every Memorial Day, Don would place flags on many Veterans’ graves to honor their service and remind their families they are not forgotten. He had an amazing sense of humor and a small habit of telling little white lies; after all, he was the President of the Liar’s Table at the Liberty Restaurant. Don was a faithful member of Edwards Memorial Church, Liberty Lions Club, American Legion Post #122, and VFW Post #1472. Don was an avid outdoorsman as he enjoyed fishing, hunting and mowing lawns with his John Deere Tractor. He liked going to the casino and playing scratch-off tickets, but more than anything, he loved spending time with his family and friends. Don will forever be a staple amongst our community, and he will be deeply missed by all who know and love him. Don is survived by his children: Laney and Don White, Rick and Brenda Clevenger, John and Paula Clevenger, Susie Carr, Dondee and Karyn Clevenger; grandchildren: Stephanie Hunt, Cory Wollyung, Casie Sandlin, Ayla Blanton, Ben and Emily Clevenger; many special friends including Boyd Dean Bothast and Jim Hensley; extended grandchildren, great-grandchildren, nieces, nephews, community members, and friends too numerous to mention. In addition to his parents, Don is preceded in death by his first love: Jackie Bymaster; second love: Myrtle Clevenger; third love: Marilyn Cox; daughter: Amy Jo Clevenger; granddaughter: Beth Rathbun; grandson: Lee Alcorn; great-granddaughter: Ayla Lou Wollyung; children of Myrtle: Donna, Bob, and Linda Hofmann. On Tuesday, July 12, 2022 at Showalter Blackwell Long, Fosdick Chapel, Liberty friends may visit the funeral home from 2:00 p.m. until the funeral service begins at 6:00 p.m. with Chaplin Rick Alvey officiating. Graveside services will be conducted at Brownsville United Methodist Cemetery on Sunday, July 17, 2022 at 1:00 p.m. Memorial contributions can be sent to Showalter Blackwell Long payable to Donald A. Clevenger for the Donald V. Clevenger Memorial Flag Fund.
See more See Less