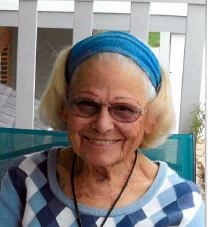 Dr. Helen A. Winter Stauffer (January 4, 1922-November 21, 2019) Helen Winter was born in Mitchell, South Dakota, to Fred and Lila (Erie) Winter on January 4, 1922. She had two younger siblings, Mary and Bud, and the family settled in the Grand Island area when she was about 5 years old. Helen graduated from Grand Island High School in 1939 and completed an Associate of Arts degree from Colorado Women's College in 1941. Helen served in the WAVES (Women’s Navy) from 1943-1945, teaching aerial gunnery at Alameda Naval Air Base in California. Miraculously, she was stationed closer to her fiancé Mike Stauffer, also of Grand Island, who was serving with the Coast Guard horse patrol. They married on March 30, 1944. After the war, the couple eventually settled on a farm near Grand Island. Their family expanded to include three daughters (Susan, Sally, Melody) and a son (Robin). During this time, Helen worked as a farm wife and stay-at-home mother, but she knew that returning to school for her teaching certificate would also help the family during lean years. When her youngest daughter, Melody, started kindergarten in 1962, Helen enrolled in classes at Kearney State College. When she could, she carpooled the nearly forty-five miles to Kearney from Grand Island with other housewives. These were long days, even with Mike and the kids helping with chores and cooking. Helen woke at 4:30am and left for school when the children did. She was home in time to help with evening chores, then do her homework late into the night. Helen attributed her success as a student to her family’s support. She believed most of the women in her carpool never graduated because their husbands did not support them. Helen shared her educational milestones with her children. She graduated with a Bachelor’s degree from Kearney State College in 1964, the same year her oldest daughter, Susan, graduated from high school. Helen then taught at Grand Island High School from 1964-1967. She completed her Master’s Degree in English from Kearney State College in 1968, the same year her son, Robin, graduated high school. She began her career as an English professor at KSC in 1968, all the while continuing her graduate studies during the summer sessions. About this time, the family left the farm and moved closer to Kearney. In 1974, the Stauffers not only celebrated Melody’s graduation from high school, but also Helen’s completion of her PhD in English literature from the University of Nebraska-Lincoln. Helen led a vibrant career. Her dissertation research focused on Mari Sandoz, and she developed the research into the most comprehensive biography of the Nebraska author, Mari Sandoz: Story Catcher of the Plains (1982). A few years later, she edited a book of correspondences, Letters of Mari Sandoz (1992). Helen served on the board of directors of the Great Plains Chautauqua, 1987-1994; Nebraska Humanities Council, 1987-1993; Western Literature Association (board directors 1976-1979, 82-85, president 1980); Sandoz Heritage Society (board of directors 1988); and was an active member of Willa Cather Pioneer Memorial, Alpha Delta Kappa, Modern Language Association, National Education Association, among others. Always an avid reader, Helen enjoyed discussions in book clubs. Her familiarity of Larry McMurty’s Terms of Endearment led to the creation of a movie role specifically for her (Flap’s secretary). She became professor emerita at KSC in 1990. She and Mike traveled the globe, and Helen never lost her love of reading. Mike passed away in 2014, the year of their 70th wedding anniversary. Helen moved to Lincoln in 2016. She is survived by son Robin (Carol) Stauffer of Fremont, Neb; daughters, Susan (Jim) Toth of Edwardsburg, Mich., Sally Vifquain of Wahoo, Neb., Melody (Rod) Chvatal of Colon, Neb.; 11 grandchildren; and 12 great-grandchildren. She was preceded in death by both parents; husband Mike Stauffer; infant son, Karl; daughter-in-law, Carol Hamley Stauffer; and son-in-law Jim Toth.
See more See Less

In Memory Of Dr. Helen A. (Winter) Stauffer