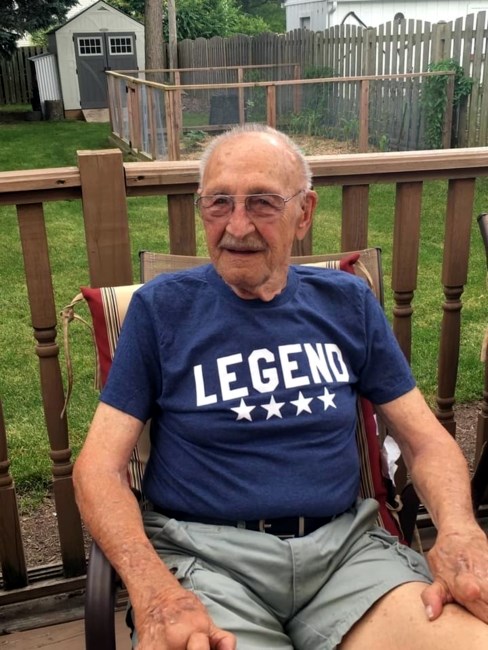 Frank L. Balaja, 94, of Naperville, passed away on Friday, January 14, 2022 surrounded by his loving family. He was born in Cicero on October 4, 1927 to Frank and Marie (Smrcek). Frank grew up in Cicero, an only child, and immediately joined the Navy after graduating high school. He served for three years, near the tail end of WWII. While in the Navy, he took courses in Photography and Printing at Anacostia. A few months after he began his service, he reported to the U.S.S. Philippine Sea in Boston Harbor. Frank was on the ship for about 2.5 years, working primarily in the printing department. His ship brought Admiral Byrd's to the South Pole for an expedition. When they crossed the equator, they wore their uniforms backwards and had to kiss King Neptune's Belly as a ritual. Before they crossed, they were referred to as "pollywogs," and after, they were "shellbacks." Frank met his wife, Dolores Chudik, on Memorial Day, 1952 at Fox Lake. The two were married on October 9, 1954. The couple bought their first home in Bellwood, where they raised their three beautiful children. When Frank wasn't busy taking care of his family, he worked as an electrician for Reynold's Metals in McCook, Il for 35 years, retiring from the company at 67. In his free time, Frank enjoyed dancing, fishing, doing puzzles, and spending time with his family. He especially loved traveling and cruising with his wife. Frank is survived by his wife of 67 years, Dolores; children, Kary (Mike) Ouska, Nancy (Dave) Hall, and Dan (Lynda) Balaja; grandchildren, Jennifer (Paul) Seebock, Kimberly (Randy) Sanda, Cassandra (Brian) Fichter, Adam (Veronica), Heinrich, Stefanie Divito, Joseph Hall, Haley (Josh) Provost, Blake Balaja, and Keygan Balaja; and great-grandchildren, Brady and Zachary Seebock, Mallory and Audrey Sanda, Abigail and Aaron Fichter, Gregory and Gavin Heinrich, Caiden Divito, and Ryan Provost. He was preceded in death by his parents, and a grandchild, DJ DeBuono. A Celebration of Frank's Life will be held on Friday, January 21, 2022 at Blake-Lamb Funeral Home, 5015 LIncoln Ave., Lisle, from 3-7pm. A Memorial Service will be held at 5pm. In lieu of flowers, memorial donations may be made in Frank's name to the Wounded Warrior Project.
See more See Less

In Memory Of Frank L. Balaja