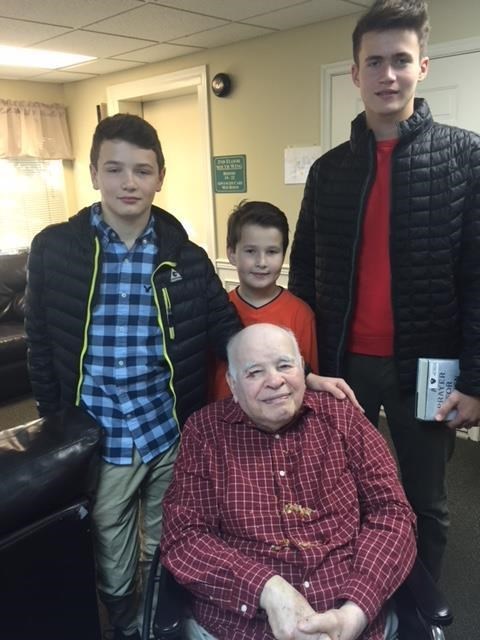 Seymour Handler, 86, formerly of Livingston, New Jersey and Edgartown, Massachusetts, passed away very peacefully on September 16 2018 in Bath, Pennsylvania at Alexandria Manor. Seymour, brother to Paul Handler and Claire Handler-Warhaftig, was born November 26 1931 in Newark, New Jersey to father Jacob and mother Yetta (Spector) Handler. He graduated from Weequahic High School and the University of Wisconsin-Madison with a bachelor’s degree in history. He spent his 20’s traveling widely throughout Europe, learning foreign languages, and writing in the Mexican countryside. Seymour married Rita Stoecker of West Germany in 1961, who predeceased him in 2006, and raised six children, including Chet Handler, who predeceased him in 1984, Roy Handler, Glen Handler, Simone Handler-Hutchinson, Shoshanna Handler and Chelsea Handler. Seymour also enjoyed each of his eight loving grandchildren, Jake, Jordan, Seneca, Max, Nick, Teddy, Charley and Russell. Seymour owned and operated an Esso and Exxon gas station for many years on Avon Avenue in Newark, New Jersey and he also bought and sold used cars at Skyline Auction, Bordentown Auction and Manheim Auction. Seymour spent much of each summer with his family on Martha’s Vineyard when not working. Seymour was a member of Temple Emanuel in Livingston New Jersey. Seymour’s fine mind, good heart and warm nature live on in his children, grandchildren and all those who had the unusual pleasure of having a conversation with him. A family funeral service is planned for Sunday September 23 2018 with burial in King Solomon Cemetery in Clifton, New Jersey.
See more See Less

In Memory Of Seymour Handler